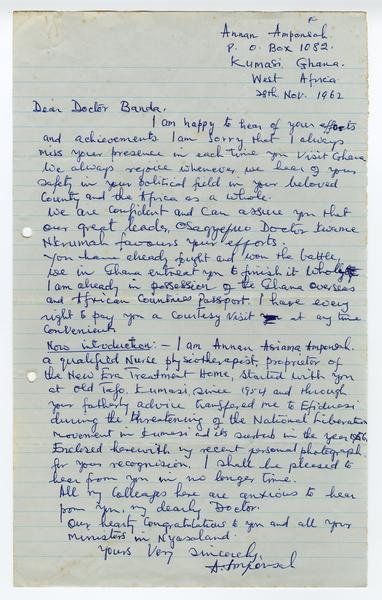 The H.K. Banda Archive consists of the papers of Dr. Hastings Kamuzu Banda (ca. 1900-1997), former Life President of Malawi, and those of his official biographer, Dr. Donald A. Brody, dating mostly from the 1950s to the 1990s. It includes published and unpublished correspondence, speeches, manuscripts, diaries, and extensive background information about Southern and Central Africa, including Malawi, Zambia, Zimbabwe, and South Africa. There are also some mixed media items in the collection, including videos, audio cassettes, photographs, and fabrics.

Information regarding the extent, arrangement of the collection, and usage restrictions can be found on the finding aid for the H. K. Banda Archive.

Dr. Hastings Kamuzu Banda was the first president of the Republic of Malawi, ruling the African nation from independence in 1964 until 1994. He played a crucial role in the break-up of the Federation of Rhodesia and Nyasaland (now Zimbabwe, Zambia, and Malawi) and was a major political player in Africa from the middle of the 20th century until he retired from politics in the 1990s.

Born in Malawi near the turn of the century (most researchers have thought that Dr. Banda was born circa 1905, but interviews conducted by Donald Brody with relatives indicate that he was born ca. 1900; no record of his birth has been found), he moved to South Africa in his teens to work as a laborer. From there he went to the U.S. to attend school, graduating from high school from Wilberforce Academy in Ohio in 1925. He briefly attended Indiana University, followed by the University of Chicago. He studied medicine and became a doctor, working in Britain and Ghana before becoming active in politics and returning to Malawi. He was imprisoned in Gwelo Prison by the colonial government, where he began work on his autobiography.

Following his release from Gwelo Prison in 1960, he was involved in negotiations that would bring about independence for Nyasaland. During the country’s first elections in 1961, Banda was elected Minister of Land, Natural Resources and Local Government and later, in 1963, he became Prime Minister of Nyasaland. In July 1964, the British Secretary of State for African Affairs agreed to end the Federation, and Nyasaland became the independent Commonwealth of Malawi. Following a cabinet crisis, Banda emerged as the first President of Malawi in 1966. During that time, his party—the Malawi Congress Party (MCP)—was declared to be the only legal party. Later, in 1970, an MCP congress declared Banda its president for life, which was confirmed by the legislature in 1971. This was to be the beginning of an authoritarian government which lasted until 1993, when Banda’s one-party state was dismantled by a referendum and a special assembly stripped him of his title of President for Life. He was defeated by Bakili Muluzi in a democratic election in 1994. He died in 1997.

Donald A. Brody lived and worked in Malawi for several years. He was chosen by Dr. Banda as his official biographer and collected the materials in this archive for that purpose.

Please use the form below to make arrangements to use African Studies Collection archival materials. Before filling out the form, please be sure to consult IUCAT and/or the finding aids for the collections.