Who is Michael Reck?

Can you identify the Michael Reck mentioned in Ernie Pyle’s will?

Michael Pierce Reck was born July 27, 1928 in Washington, DC, and died. July 11, 1993 in Insbruck, Austria. He was the son of Alfred Pierce Reck and his first wife, Daisy Reck. He studied Far Eastern language at Harvard, worked as a book editor in New York and taught at the University of Puerto Rico. In 1967 he published Ezra Pound: A Close-Up (McGraw-Hill), and his poetry appeared in numerous literary magazines. His translation of the Iliad, on which he had been working for many years, appeared in 1994.

In 1940 he was living in an apartment with his mother at 2229 Bancroft Street in Washington, DC, where they had also been living in 1935. His mother, Daisy, worked as a publisher in the Department of the Interior. In 1937 he and his mother travelled to Puerto Rico. They were then living at 1728 20th Street NW in Washington, DC. At 18 he travelled again to Puerto Rico in 1946 and gave his address as Box 203, Darien Conn. He listed his occupation as student. Enlistment records give Puerto Rico as his state of residence; the date of enlistment was 20 Sep 1946 and the grade was Private. The form indicated: Term of Enlistment: Enlistment for the duration of the War or other emergency, plus six months, subject to the discretion of the President or otherwise according to law. He was then single, without dependents, and his education level was grammar school. He served with the American occupation Army in Japan.

After military service Reck studied at Harvard. He completed his doctoral thesis, “Masaoka Shiki und seine Haiku-Dichtung [Masaoka Shiki and His Haiku Poetry” at the Ludwig-Maximilians Universität München in 1968. [The dissertation contains a vita statement]. His advisor was Horst Hammitzsch, a noted Japanologist with an interest in poetry.

Reck admired the poetry of Ezra Pound and visited the poet over a period of fifteen years during his incarceration at Saint Elisabeth’s insane asylum in Washington and later in Italy. In “about the author” on the final page of Ezra Pound: A Close-up is a sketch of Michael Reck which reads:

Michael Reck, fresh out of Harvard, went to visit Ezra Pound at Saint Elizabeth’s Hospital in Washington, D. C. in 1951. Pound saw some promise in Reck’s own poetry and enrolled him in the “Ezuversity,” as Pound jocularly called his attempts to educate the young – even at that time Pound was a tireless and selfless teacher. Over the next fifteen years Reck had a unique chance to observe this vigorous, brilliant, cantankerous, magnanimous poet, one of the central figures in this century’s literature. After taking an M.A. in Far Eastern Languages at Harvard, Michael Reck worked for four years in publishing in New York. He then taught English, Greek, and Japanese at the University of Puerto Rico, and went to continue his studies in Germany, where he now lives on the Amersee near Munich. His poetry has been published in a number of magazines and in James Laughlin’s New Directions anthology

The “about the translator” section of Homer: the Iliad gives this description:

Michael Pierce Reck was born in Washington, D.C., in 1928 and went to school there. He graduated from Harvard in 1950 and, after serving in the army in Japan, took his M.A. in Far Eastern languages at Harvard, then worked for four years as an editor in New York publishing. He later taught English, Greek, and Japanese at the University of Puerto Rico, and he continued his study of classical and Far Eastern languages at Munich University, Germany, from which he received his doctorate. Reck returned to the University of Puerto Rico in 1967 to teach, and his book, Ezra Pound: A Close-Up, was published in the same year. In 1983-84 he was Fulbright Professor of American Literature in Erlangen and Bamberg, Germany. He retired from the University of Puerto Rico after twenty years of teaching and lived in Germany and Austria until his death in 1993. Michael Reck worked on the translation of The Iliad the last thirty years of his life. His poetry has been published in James Laughlin’s New Directions anthology and in a number of magazines.

According to a brief, poetic tribute in Paideuma (winter, 1993) Michael Reck was survived by his sons Claudio, Christopher and Michael, Jr., and by his wife Gaby.

In April, 1930 Alfred Reck was living in Washington, DC, with his wife, Daisy and his son, Michael P. He lists his occupation as a writer and the industry as newspaper.

In 1940 Alfred P. Reck was living with his wife, Patricia C. Reck, in Oakland California. In 1935 they had been living in Salt Lake City. He gives as highest grade of school completed 2 years of college (she give four years of college completed). He is an editor in the newspaper industry. He gives his salary as $5,000. 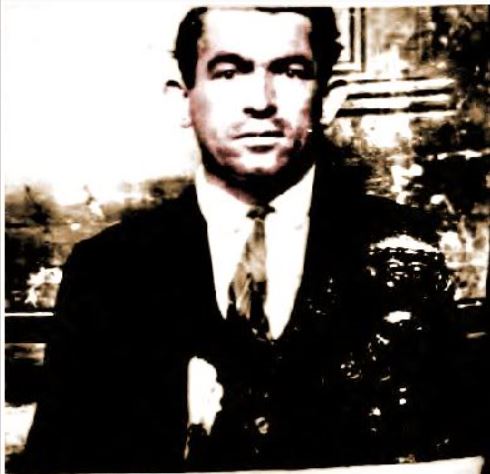 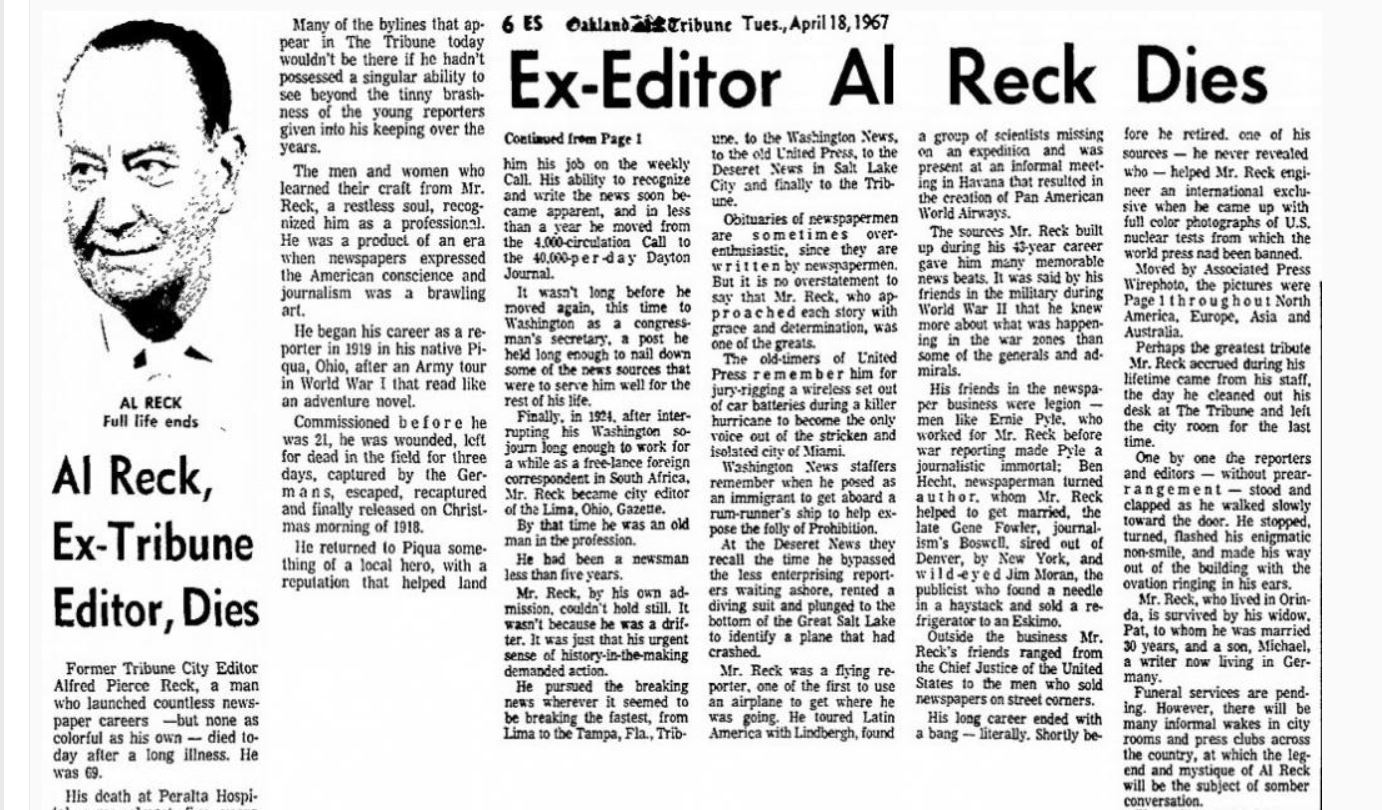