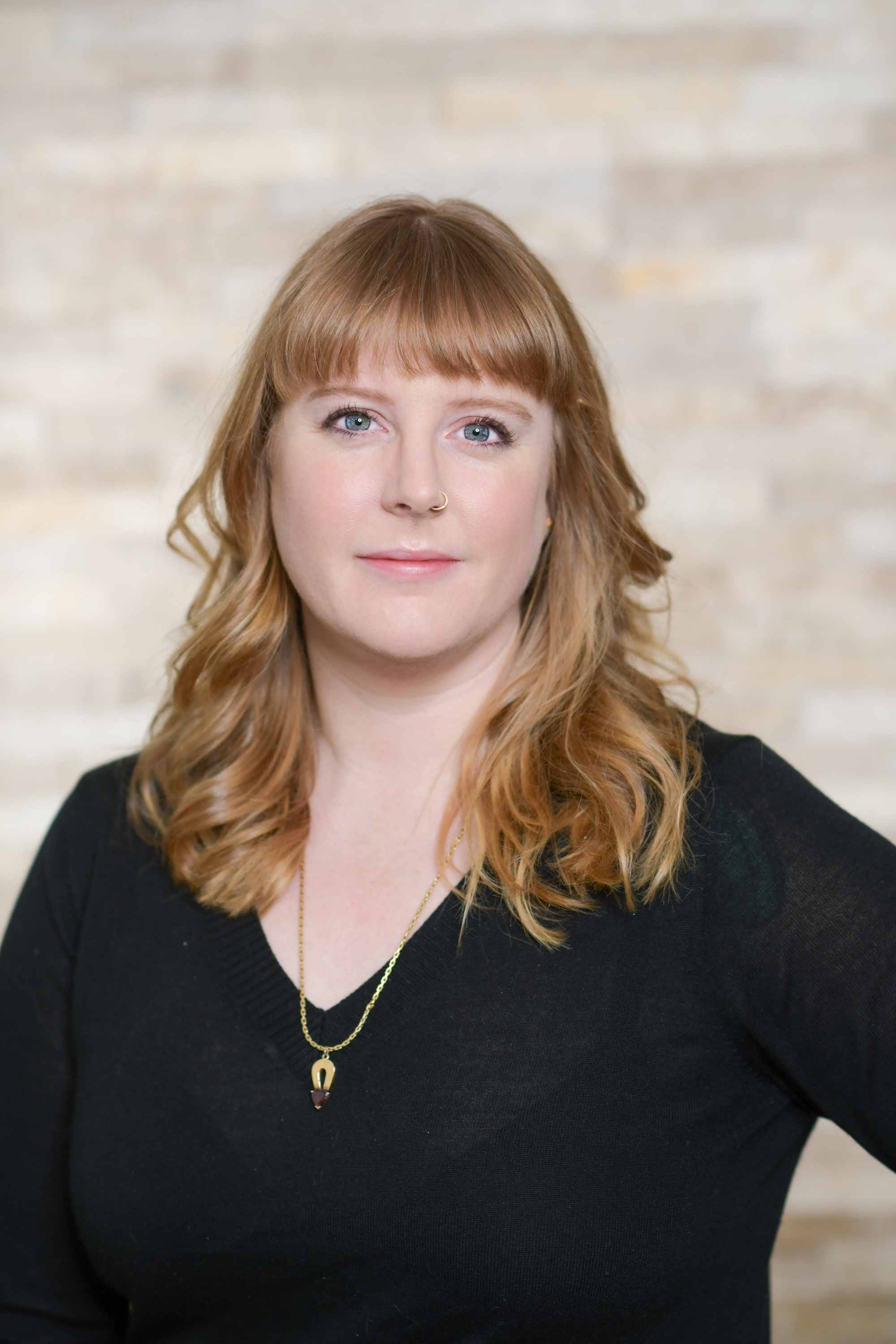 See the "more information" tab if you don't find what you're looking for.

The following categories of maps represent a small selection of the collection, but highlight the types of things you might discover.

The Wells Library map collection contains a wide selection of military maps from around the world. These were created by various governments and armies for planning or tactical purposes, and sometimes used in battle. One of the larger collections of this type is the Russian Military Topographic Map collection. These are maps of Eastern Europe and that were created by the Soviet military in the years before WWII. Many were captured in the field by German, US, and British troops, and the maps eventually made their way to Indiana University. You can read more about these maps in National Geographic and Wired. 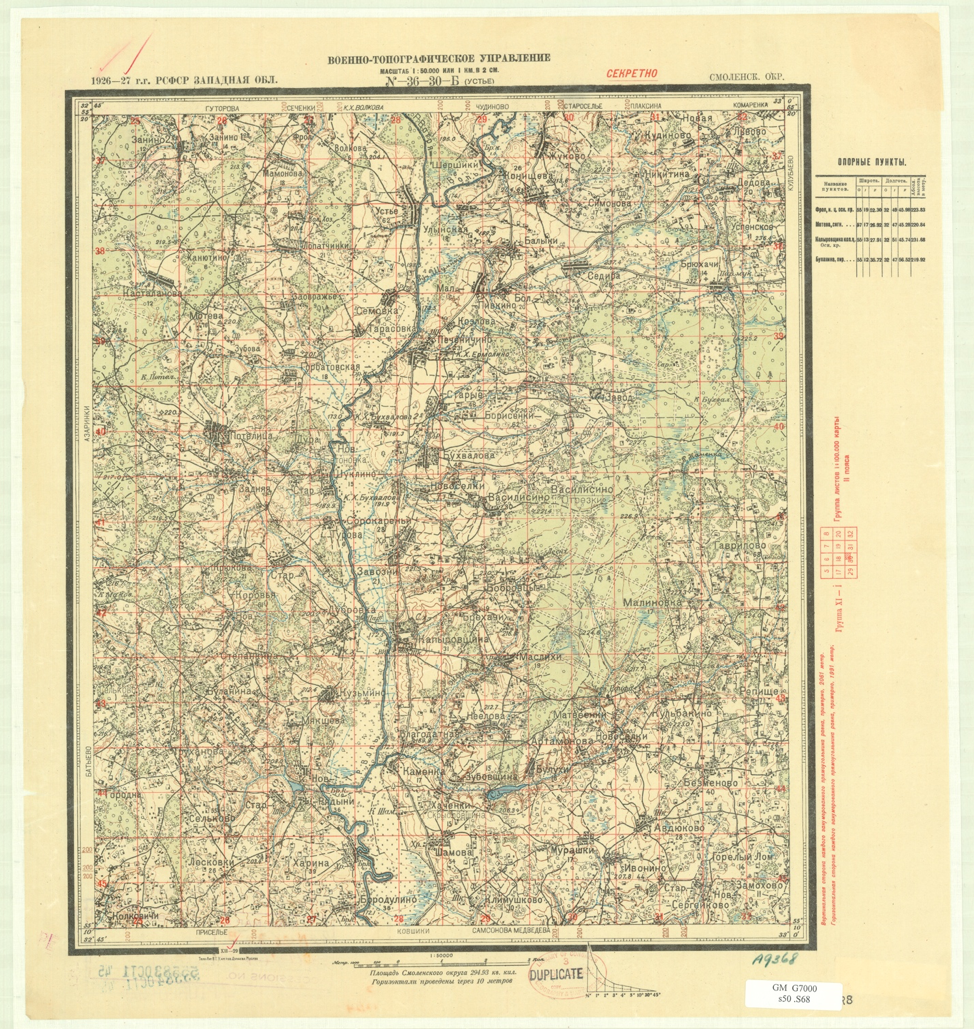 We also hold many military maps created by the US military, including "Newsmaps" from WWII. These fascinating maps were sent to overseas and domestic military operations to keep people informed of the progress of the war. They present updates on troop movements, enemy atrocities, and tips for returning to civilian life in an informal (and sometimes racist) tone. The University of North Texas has digitized this collection, and we hold them in print at the Herman B Wells Library. We also have similar maps produced by the British military. 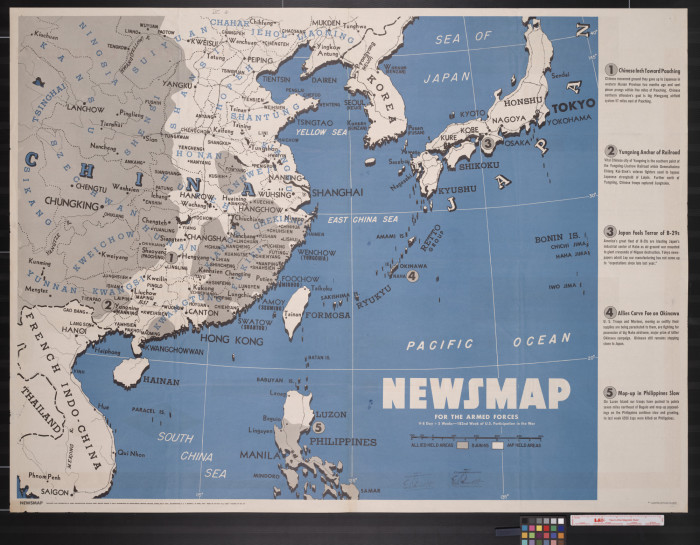 Indiana Historic Maps is IU's database for public domain maps of Indiana. Click on "Interactive View" for full functionality.​ This collection represents only a small selection of our maps of Indiana! Visit the library or search IUCAT for more.

The Sanborn Maps were made by the Sanborn Fire Insurance company for their internal use, and therefore show elements that are useful for assessing the cost of insurance for a particular area. For example, they indicate if a building is made of wood or stone, where the nearest fire hydrant is located, and often such details as the schedule of the night watchman. They depict individual buildings in urban areas, and are valuable resources for historical research of urban centers, or even individual businesses or homes. We hold Sanborn Maps for the state of Indiana, ranging from the late 19th Century through the 1960's.

IUPUI's Sanborn Maps (has great metadata and allows you to search by topic, such as "saloons (bars)"!) 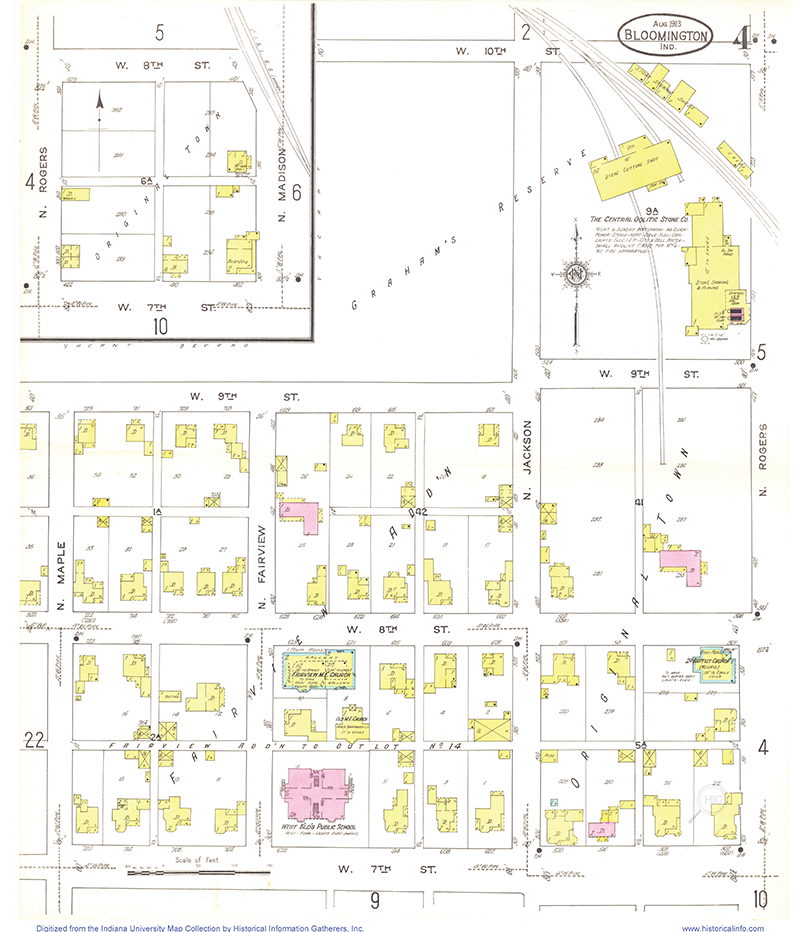 Tourist maps often include advertisements for local businesses, highlight areas of interest or historical importance, and are generally more casual in tone than official government maps. The primary purpose is to offer an overview of a city or country and to direct tourists to areas of interest. They sometimes include illustrations to this end. Tourist maps offer insight into what is/was perceived to be of interest or of value to visitors, and help construct a sense of place. We have a strong collection of tourist maps from the 1950's to present for most countries in the world.

For example, this 1970 map of Panama, titled "Panama, City of Contrasts" 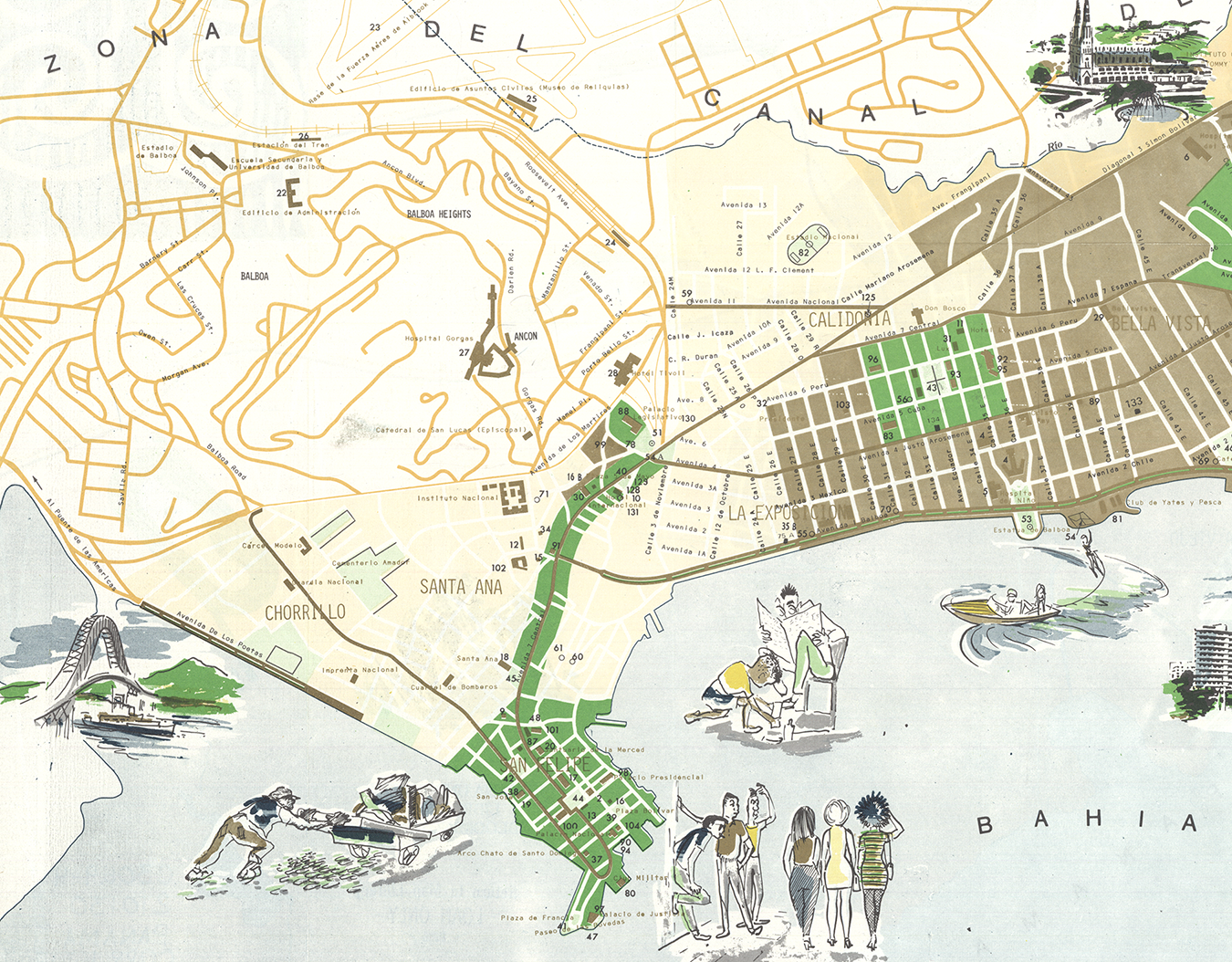 We hold topographic map series for most countries in the world. Topographic maps show detail of an area's terrain, including elevation (by using contour lines), land forms, lakes, rivers, and roads. These are usually produced by a government mapping agency, like the US Geological Survey in the United States. 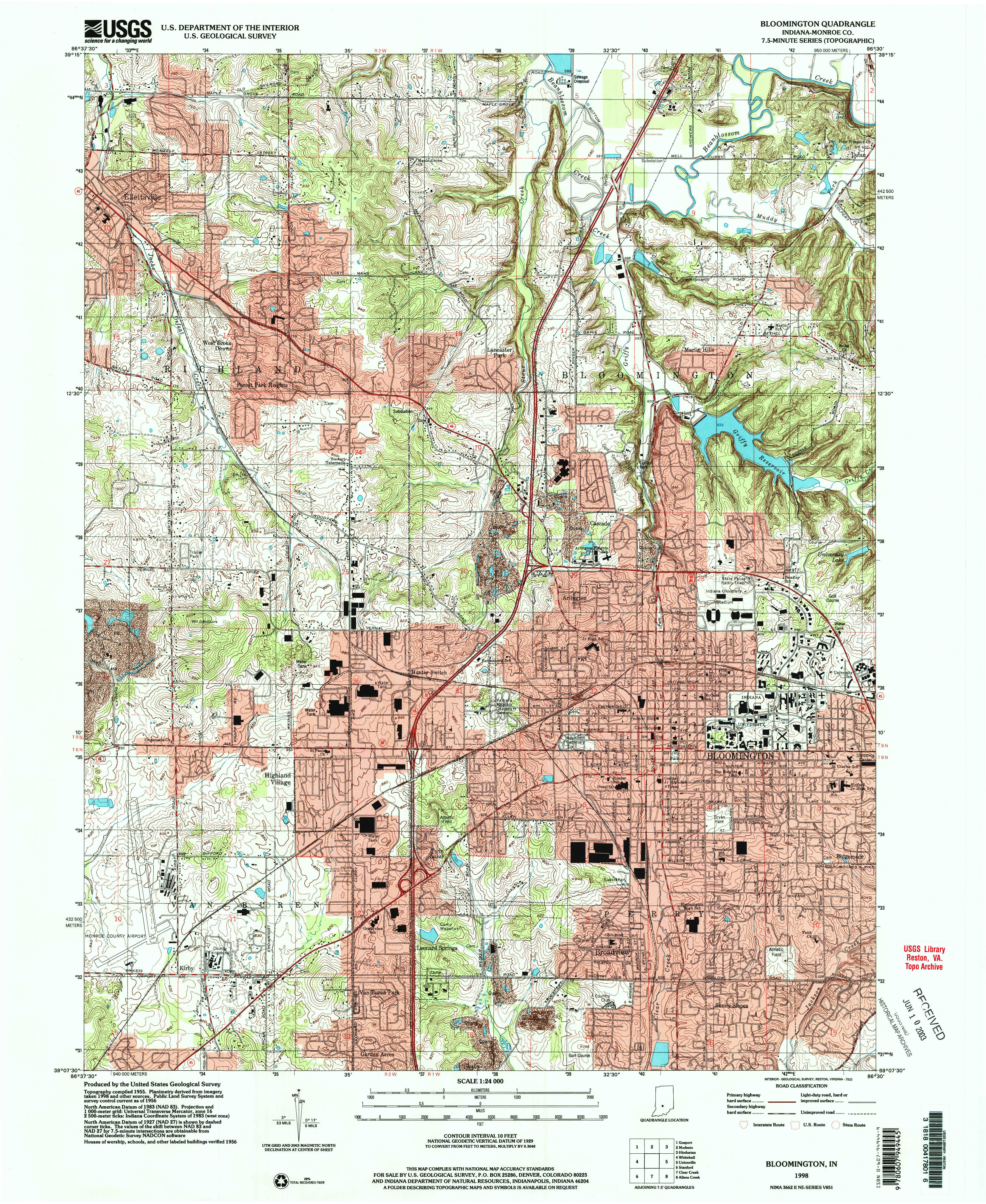 The map collection at the Wells Library is vast and holds many surprises. With about 40% of the collection still uncataloged, there are sure to be some hidden gems. Some other categories of maps that you might investigate are government publications, such as maps from the CIA, State Department, or foreign governments, infrastructure maps, or other maps made by city governments.

Visit Map Collections at the Library for more information.