Catherine A. Brekus, ed. The religious history of American women : reimagining the past

Joy Ladin, The soul of the stranger : reading God and Torah from a transgender perspective

Reading some of the best-known Torah stories through the lens of transgender experience, Joy Ladin explores fundamental questions about how religious texts, traditions, and the understanding of God can be enriched by transgender perspectives, and how the Torah and trans lives can illuminate one another. Includes chapters: Introduction: shipwrecked with God, The genesis of gender, Trans experience in the Torah, Close encounters with an incomprehensible God, Reading between the binaries, and Knowing the soul of the stranger.

This groundbreaking book explores Buddhist thought and culture, from multiple Buddhist perspectives, as sources for feminist reflection and social action. Too often, when writers apply terms such as “woman,” “femininity,” and “feminism” to Buddhist texts and contexts, they begin with models of feminist thinking that foreground questions and concerns arising from Western experience.

The treatment and role of women is one of the most discussed and controversial aspects of Islam. In this volume, three scholars of Islam survey the situation of women in Islam, focusing on how Muslim views about and experiences of gender are changing in the Western diaspora.

As stated in Wikipedia,  "the study of women and religion typically examines the role of women and their roles within particular religious faiths, and religious doctrines relating to gender, gender roles, and particular women in religious history. Most religions elevate the status power of men over women, have stricter sanctions against women, and require them to be submissive. While there has been changes towards equality, religions overall still lag the rest of society in addressing gender issues. There are fundamentalists within every religion who actively resist change and believe that they should continue to follow what they already have known for years. There is often a dualism within a religion that exalts women on the one hand, while demanding more rigorous displays of devotion on the other. This leads some feminists to see religion as the last barrier for female emancipation."

Images of Women and Religion 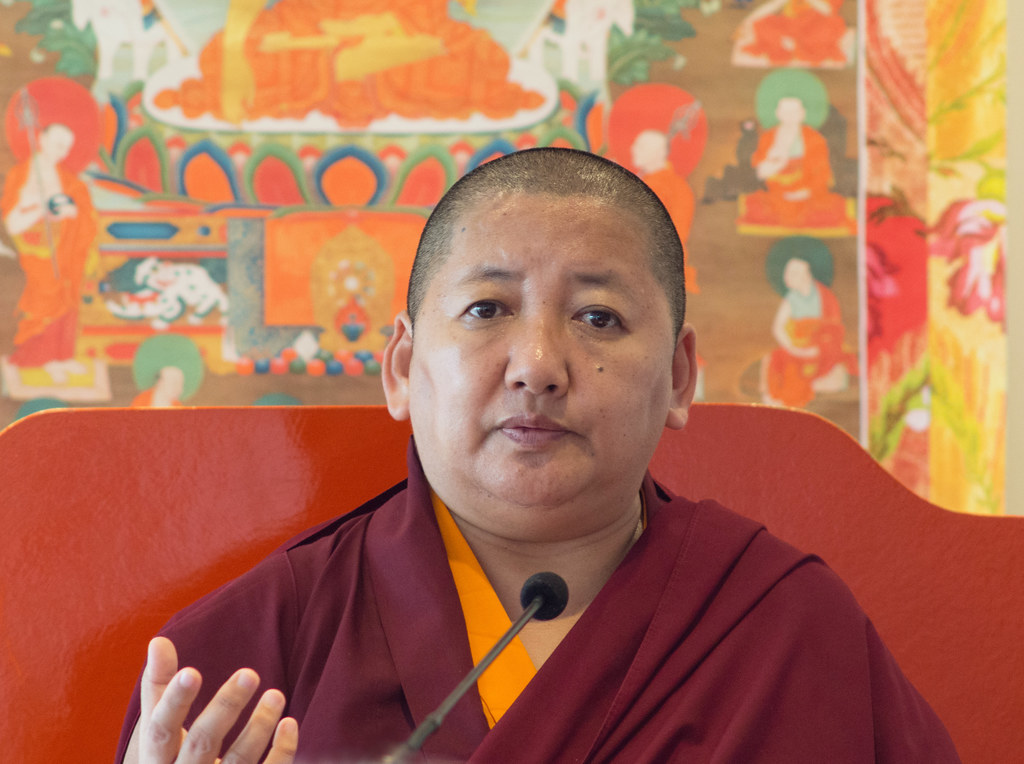 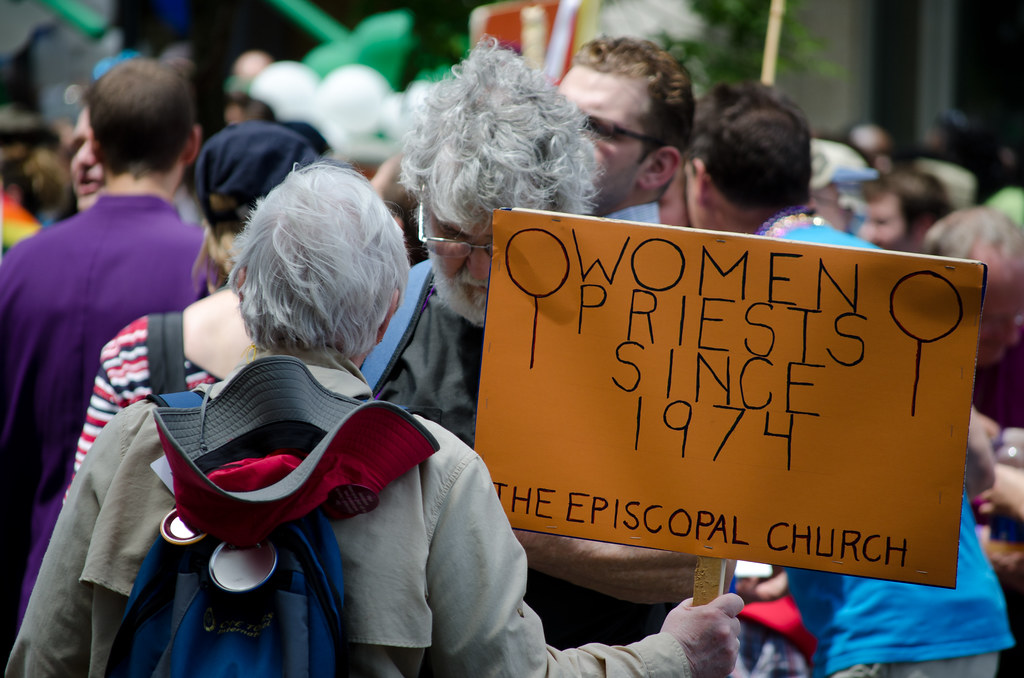 "women priests" by Tim Pierce is licensed under CC BY 2.0 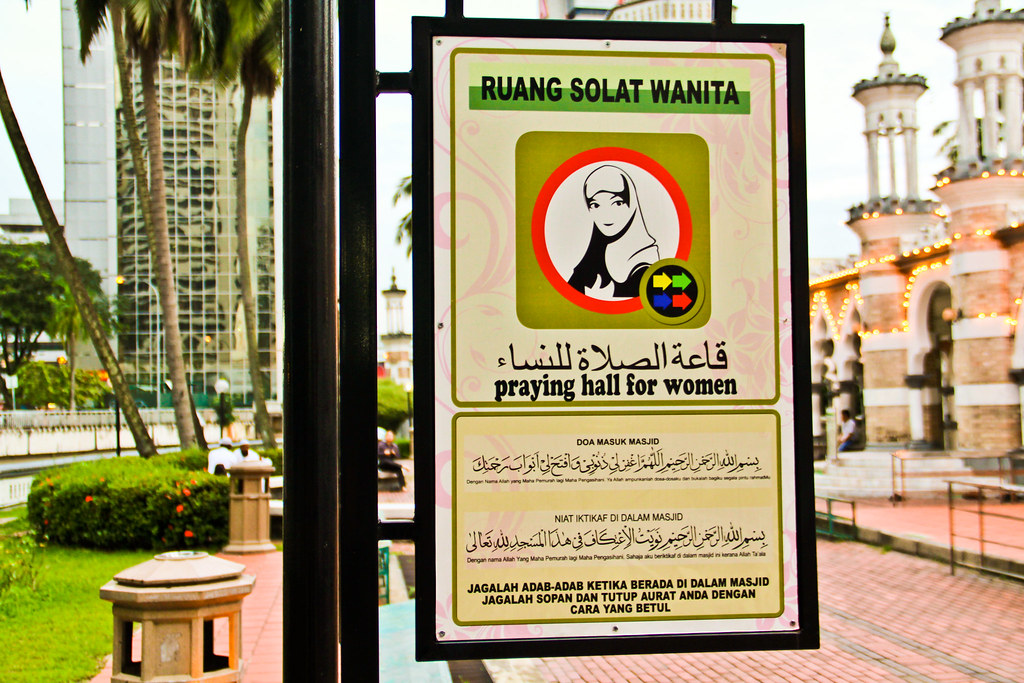 "Praying Hall For Muslim Women" by Sham Hardy is licensed under CC BY-SA 2.0 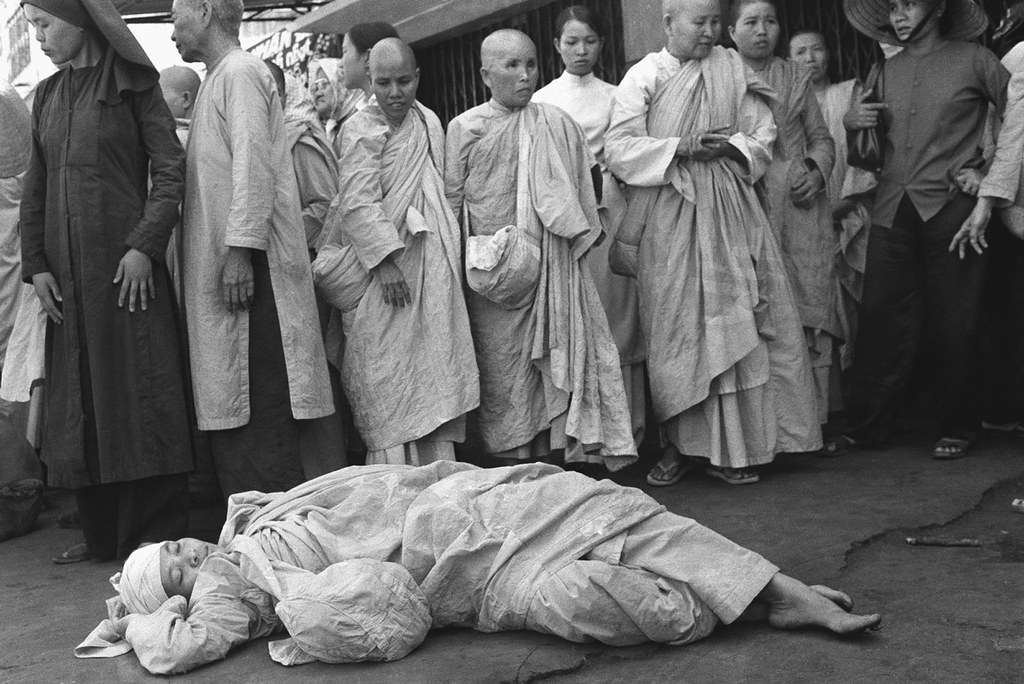 "Vietnam War - Fall of Saigon" by manhhai is licensed under CC BY 2.0 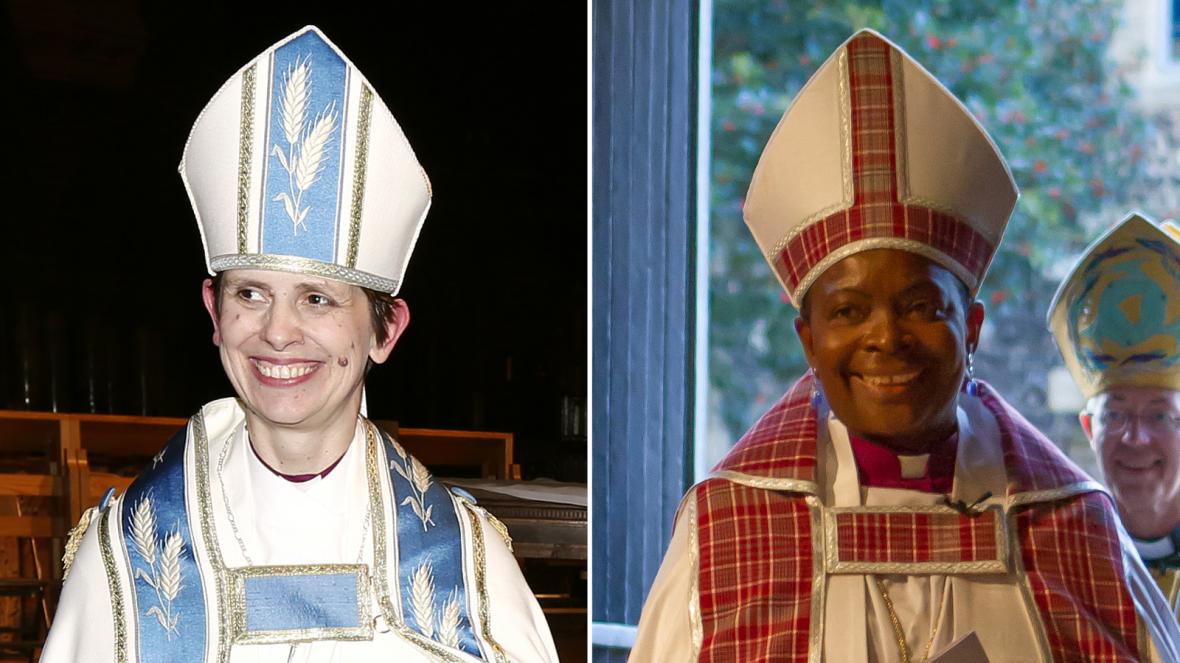 Hit and Stay: A History of Faith and Resistance (97 mins, 2012): A documentary about priests and nuns who protested the Vietnam War by breaking into draft boards, destroying draft records, and then waiting around to be arrested. Their actions inspired a movement, which shaped the anti-war movement and helped bring an end to the draft.

Fashioning Faith (23 mins, 2009): Fashioning Faith takes a behind the scenes look at the emerging world of Islamic fashion and US-based clothing designers who make it possible. The film interweaves interviews and verité footage from a diverse array of Muslim women with one goal in common – to express their faith through fashion.

Religion and Sexuality (32 mins, 2015): For many persons, religious values become the basis of sexual values and behaviors. In this program, two high school students share aspects of their church-sponsored sex education program. Three Muslim college students talk about culture shock when coming to the U.S. as well as their dating practices. Finally, a psychology graduate student from a Mormon family shares his "coming out.

Flowers for Guadalupe (57 mins, 1996):  Flowers for Guadalupe/Flores para Guadalupe explores the importance of the Virgin of Guadalupe as a liberating symbol for Mexican women today. In the course of this richly textured treatment of an evolving symbol, twenty-three women speak out, in traditional testimonio format. This unusual "contata" of women s voices representing urban, small-town, and rural communities, is intercut with scenes of daily women's work and celebration of the Virgin of Guadalupe in various contexts, including festivities organized by the Comite Guadalupano in the Williamsburg section of Brooklyn, N. Y.

Madwoman of God (77 mins, 2008): A story of the passion between a nun and God, her "divine spouse, " Jean-Daniel Lafond's film paints an astonishing portrait of Marie de l'Incarnation - a mid-17th-century mystic who abandoned her son and left France to build a convent in Canada, where she became the first female writer in New France. The documentary fuses actress and role, past and present - and takes us on a truly extraordinary historical and artistic journey.

World Sikhism Today (49 mins, 2013): Adherents of Sikhism belong to one of the most visible and perhaps least understood religions in the world. This program describes the Sikh principles and lifestyle and documents the recent history and current state of Sikhism in India, Europe, and North America. Interviews with Sikh leaders and families, scholars, and human rights activists paint a picture of a brave, spiritual, and hardworking people subjected to varied levels of racial discrimination and, in India, harsh suppression and even massacres.

The Godly Family: Protestantism in the Home (60 mins, 2006): Martin Luther's most effective strike against the Church may have been his decision to marry. This program shows how Luther's radical choice and the Protestant movements of the 16th and 17th centuries transformed Western attitudes toward sex, love, marriage, gender roles, and family life. The progression away from Victorian strictures and the inclusion of women and gays in the clergy are also studied.

Miriam’s Daughters Celebrate (24 min, 1996): Miriam's Daughters Celebrate shows Jewish feminists creating new rituals. In the two occasions celebrated in this video, the Passover Seder and a baby- girl naming ceremony -- the women speak about their lives and how traditional Jewish rituals relate to them as well as men. Instead of the traditional Passover where women have cooked and men have presided over the Seder, this group of women -- mothers and daughters, sisters and friends -- reads from a feminist Haggadah.

Voices of Reform (26 mins, 2004): Many reform movements emerged from the Second Great Awakening [a Protestant revival movement], ranging from temperance to women's suffrage to abolitionism. Take a closer look at the emergence of romanticism in literature and art as well as the experiments of utopian societies.

During Covid, only IU faculty, staff and students can borrow materials from Media Services with a valid IU crimson card.  Face masks are required. Be sure to check with Media Services for hours.  VHS titles are housed off-site at ALF, and can be requested via IUCAT. Suggested keywords in IUCAT: women and religion, church, specific religious references, such as: bible, buddhism, christianity, muslim, quran, tora, etc. Limit to film & video, dvd/videodisc, Bloomington campus.

God Loves Uganda (DVD, 83 mins, 2014): Examines the role played by the American evangelical movement and the International House of Prayer megachurch in the state-sanctioned persecution of homosexuals in Uganda.

A Conversation with Alice Walker (VHS and Streaming, 31 mins, 1992): Alice Walker shares her spiritual journey from a sharecropping childhood in rural Georgia to the peace and creativity of her present retreat in northern California. She reads from her poetry and discusses contemporary America with an anger and urgency rooted in an abiding optimism. Explains the "womanist" perspective of her 1983 Pulitizer Prize winning novel The Color Purple and her most recent book Possessing the Secret of Joy.

Yentl (VHS, 134 mins, 1989): Set in Eastern Europe in the early 1900's, Yentl tells the story of a young woman who wishes desperately to learn. Because of the prejudice against women studying, she disguises herself as a male Yeshiva student. Written, directed by, and starring Barbra Streisand, who was the first woman to win a Golden Globe for Best Director for the film.

Behind the Veil: Nuns (VHS, 130 mins, 1984): Records the turbulent history and remarkable achievement of women in religion from the pre-Christian Celtic communities to the radical sisters of the 1980s. Filmed in Ireland, Italy, Canada, and the United States.

Elizabeth (DVD, 124 mins, 1999): Queen Elizabeth I must learn to weigh her counsel carefully and ignore her private yearnings if she is to keep her crown--and her head. A thriller of intrigue in the court of one of history's greatest monarchs. Starring Cate Blanchett.

Be Fruitful & Multiply (DVD, 50 mins, 2005): Profiles four ultra-orthodox Jewish women in the U.S. and Israel as they perform the routines of their daily lives, including cooking, housekeeping and childcare. The women discuss their beliefs related to the traditional roles for men and women dictated by the Jewish religion, as well as their views on living their lives in a continual cycle of childbirth, nursing and nurturing.

Suffragettes in the Silent Cinema (DVD, 35 mins, 2003): In the days before movies could talk, silent films spoke clearly of sexual politics. An assemblage of silent era footage which opens a historic window on how filmmakers on both sides of the women's suffrage issue used the exciting new medium to create powerful propaganda and images about women. Through clips from films like A Lively Affair (1912), A Busy Day (1914), and What 80 Million Women Want (1913), the film raises key issues about the struggle for gender equality and the portrayal of women in the media.

Searching For Sandeep (DVD, 55 mins, 2007): Single, frustrated and lonely in the middle of Sydney's thriving gay community, director Poppy Stockell decides to 'research' a light-hearted look at the lesbian Internet-dating scene. To her surprise and delight, she forges a deep online connection with an English woman, Sandeep Virdi…complicated by the reality that Sandeep is Sikh, lives at home with her conservative family, and has kept her sexuality a secret ... Follows the couple's tumultuous relationship across two years and three continents, in a touching examination of sexuality, religion, globalization, and culture seen through the lens of this uniquely modern love story.