This kit provides the materials needed to make a simple macrame plant hanger. Learn how to tie two different types of macrame knots in order to make a holder for a small potted plant.

Included in Your Kit

Loop the Cord Through the Ring

1. You should have eight pieces of macrame that are approximately eight feet long and one piece that is a few feet long.

2. Unravel all eight pieces and loop them through your wooden hoop at the halfway point so that you now have 16 pieces of cord hanging down from your ring. 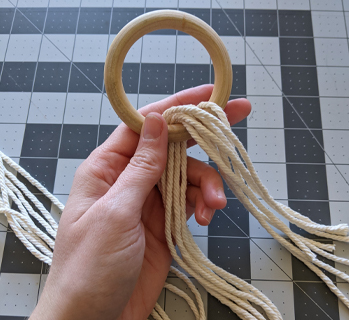 *Note that these video demonstrations have the cord hanging, but you can lay your cord out flat on a table to tie your knots.

3. Next we’re going to tie a wrapped knot to secure the cord to the wooden ring. Grab the remaining short piece of cord to tie this knot.

4. Put the short piece of cord over your looped cords with the short tail to the left, a loop pointing down, and the long tail to the right.

5. Wrap the long tail around the looped cords and the loop of the short cord.

7. After you’ve looped the cord around several times, thread the long tail through the loop at the bottom.

8. Pull up on the short tail to tighten the knot and pull it underneath the wrapped cord.

9. Cut the ends of the cord as close to the knot as possible.

Tie a Row of Square Knots

*Note that these video demonstrations have the cord hanging, but you can lay your cord out flat on a table to tie your knots.

10. Separate your 16 cord pieces into four groups of four pieces.

11. We will tie two square knots over each of these four groups. To get them evenly spaced around the pot, use a ruler or measuring tape and measure the same distance from the wrapped knot along each group of cords and mark it with a pencil.

12. Measure 15 inches for the first row of square knots. Each group of four strands needs to be separated into the two outer cords that will be used to tie the knots and the two center cords that the knots will be tied over. Lay the left cord over the center cords and under the cord to the right.

13. Thread the right cord under the center cords and up over the cord on the left. Pull to tighten, lining the knot up with your measuring mark.

17. Follow these steps to create two square knots over each four strand group at the same distance from the wrapped knot.

18. Next, we will make another row of square knots a bit below our first row. These knots will be made over new groups of four strands. You will take two cords each from adjacent groups of four: one center cord and the right from one and one center cord and the left from the other. Measure five inches below the previous row of knots for the second row.

19. Next, tie two square knots at the measured mark over these new groups of four strands.

20. Once you get to the last strands, you will have to flip your work over to tie the final group of four strands. 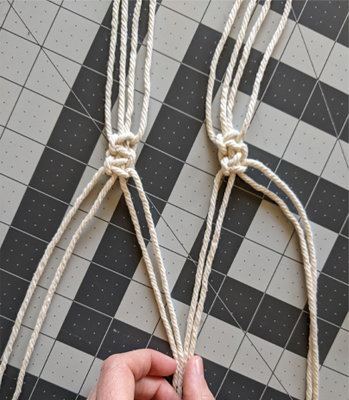 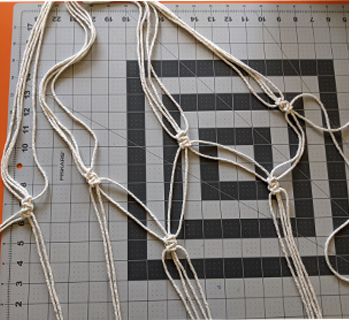 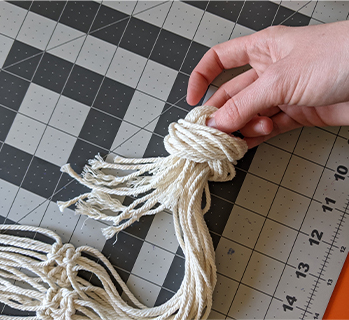 Bloomington has several local shops and nurseries where you can purchase small plants that are perfect for this macrame plant hanger!

Interested in trying different seeds? Visit the Seed Library at the Monroe County Public Library or pick up seeds from the Wylie House Museum.