ISMS: A Guide to Movements in Art

This guide was created for the use of the Eskenazi Museum Docents. However, anyone is free to use it!

This page covers different movements (isms) in the world of art.

Examples from the Sidney and Lois Eskenazi Museum of Art 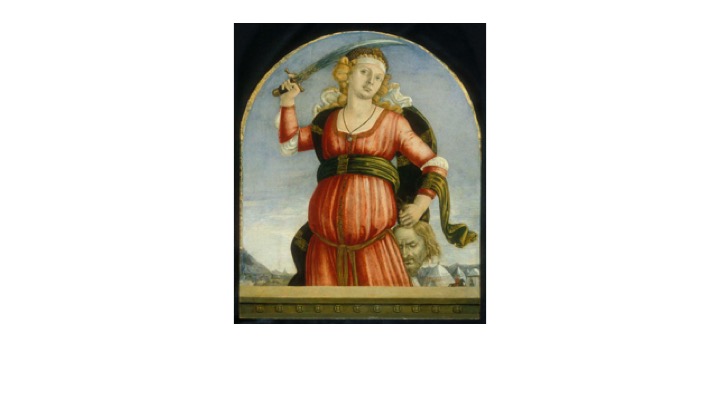 This sword-wielding woman has traditionally been identified as Judith, an ancient Israelite who beheaded the Assyrian general Holofernes. However, because the panel was cut down at some point, her identity is not certain. More recently, scholars have suggested she is Tomyris, who decapitated the Persian king Cyrus the Great after her central Asian people, the Massagetai, defeated his army. Likely commissioned by the Piccolomini family of Siena, this portrait originally formed part of a series of eight full-length portraits of heroes and heroines from antiquity. The subject of Tomyris better aligns with the Greco-Roman theme of the larger series. 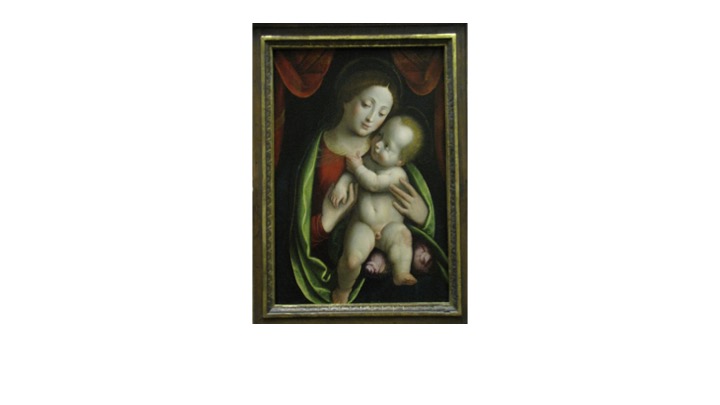 A portrait of a seated young woman with a halo dressed in blue and red holding a nude infant. The woman’s eyes are cast down towards the infant as he looks up at her, bringing his hand towards her chest. The infant also has a halo, and the two are framed by flowing red curtains. 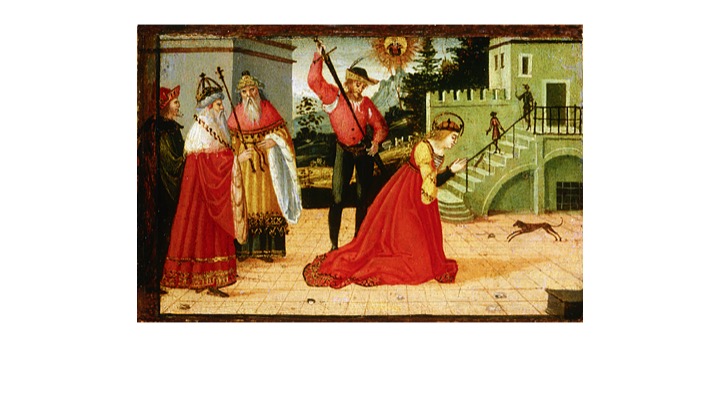 A young woman in red kneels and clasps her hands while a man unsheathes a sword above her. Three men stand to watch. 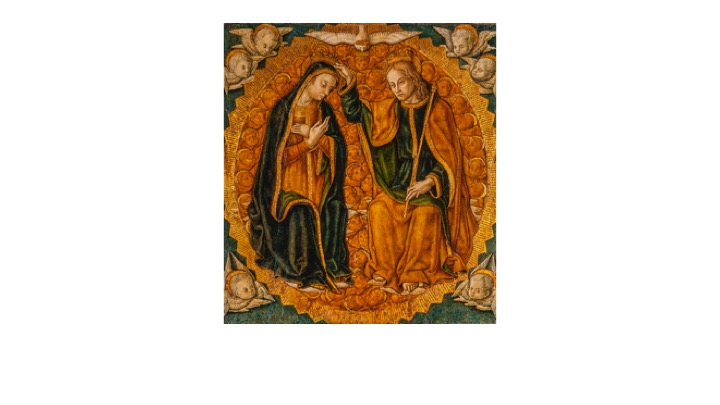 paintings
Panel from an Altarpiece: Coronation of the Virgin
Artist: Vittore Crivelli

Vittore Crivelli modeled his style on that of his older brother, Carlo Crivelli (ca. 1430/35–before 1495), whose work is more highly esteemed. Both brothers worked in a late Gothic style that emphasized clearly delineated forms and extensive use of gold leaf. Gold dominates the palette of this depiction of the Coronation of the Virgin—the crowning of the Virgin Mary as Queen of Heaven by Christ after her death—which was presumably once part of a larger altarpiece. Vittore Crivelli, though born in Venice, settled in the region of Le Marche, where he worked for ecclesiastical and noble patrons. 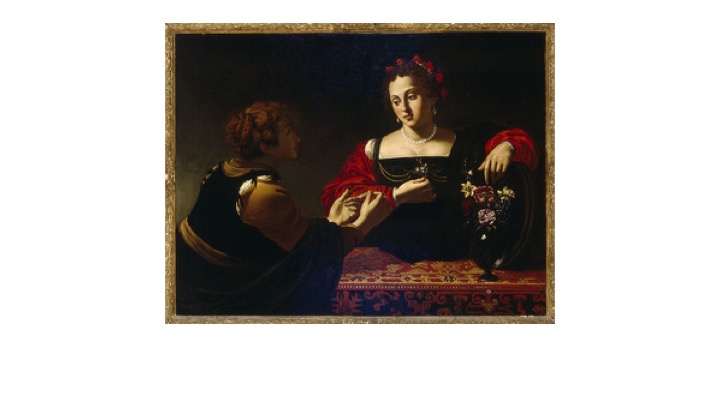 paintings
The Conversion of the Magdalene
A Courtesan and her Servant Woman
Attributed To: Pietro Paolini

Caravaggio was one of the most distinctive and influential painters working in Rome around 1600. His unique handling of light attracted many followers and admirers, and several artists produced copies of his work, although not all were exact reproductions. In this painting, based on Caravaggio’s Martha and Mary Magdalen (ca. 1598), Pietro Paolini made many changes from the original. 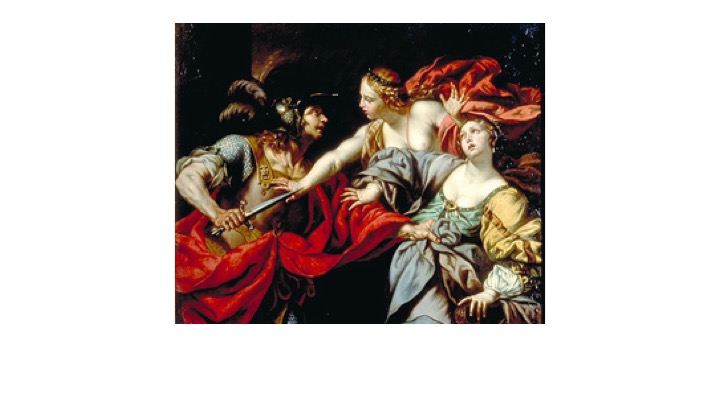 paintings
Venus Preventing Aeneas from Killing Helen of Troy
Alexander Prevented from Killing Roxana
Menelaus intending to punish the infidelity of his wife [but is withheld by Pity]
Artist: Luca Ferrari

Gift of the Friends of Art, Eskenazi Museum of Art, Indiana University

The small scale, jewel-like palette, and copper support of this painting suggest it was intended for a Kunstkammer, collector's cabinet. Likely produced for a classically educated patron, the painting depicts a scene from the Aeneid, an epic written by the Roman poet Virgil between 29 and 19 BCE. The Aeneid tells the story of Aeneas, a Trojan who becomes ancestor of the Romans after the fall of Troy. Luca Ferrari painted at least four versions of this dramatic composition. 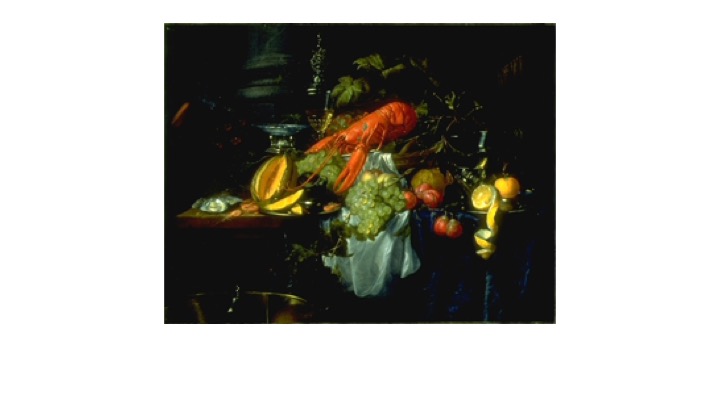 An abundance of fruit, seafood, bread, and wine crowd a table in this still life painting. The seafood appears luxurious to our eyes, but it was cheap and common fare in Pieter de Ring’s time. However, the grapes, melons, and oranges; the Chinese porcelain dish; and the African Grey parrot at the left were expensive items obtained through the foreign trade that made Holland wealthy in the seventeenth century. Dutch still life paintings often convey moralizing messages. Here, the fresh fruit and seafood—foods that must be consumed quickly before they spoil—refer to the passage of time, a subtle commentary on human mortality. 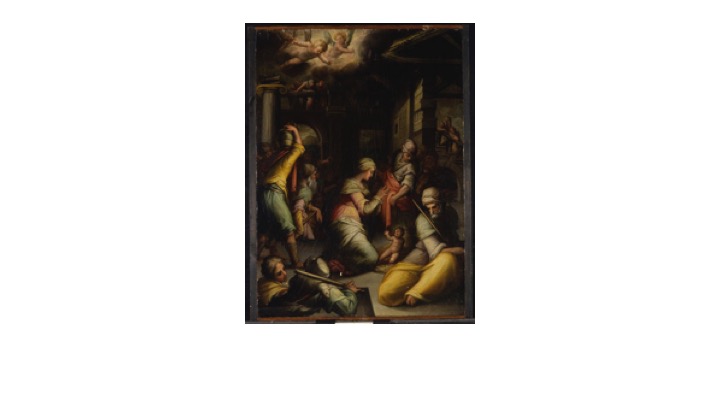 The Florentine painter Naldini trained for eight years with the Mannerist painter Jacopo Pontormo. Like his teacher, Naldini’s work is characterized by dramatic figural groups and an emphasis on strong color. The influence of Andrea del Sarto, another Mannerist whose work is displayed to the right, can also be detected in Naldini’s paintings. In this portrayal of the shepherds adoring the Christ child, the figures appear oddly detached from each other, but Naldini has arranged the figures’ arms and staffs to lead the viewer’s eye around the composition in a circular direction. 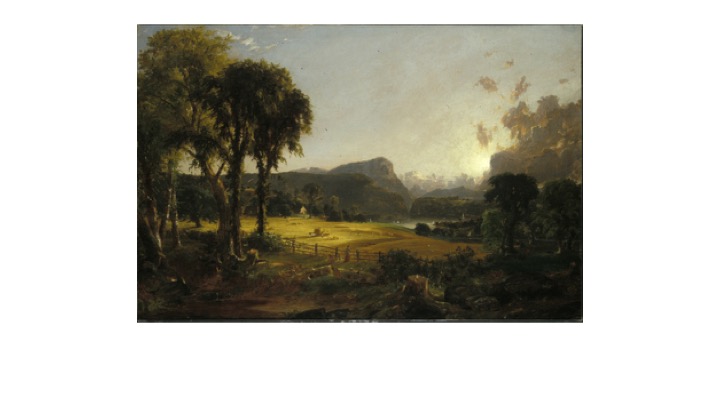 Jasper Francis Cropsey was a leading member of the Hudson River School, the first recognizably American school of painting. American Harvesting, with its orderly progression from once-primeval forest to rich farmland and distant mountains, presents an iconic image of the rural American landscape. In the background, the light breaking through the western clouds is a commentary on the widespread belief that America’s westward expansion—often described as manifest destiny—was a divine right. Cropsey displayed this painting at the 1851 exhibition of the American Art-Union to great acclaim. 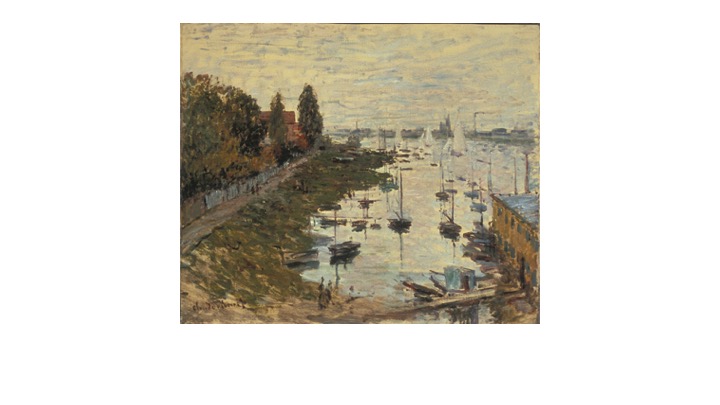 Many of the Impressionists congregated at the small town of Argenteuil near Paris to paint the River Seine. The town was popular during the summer with urban day-trippers who enjoyed sailing on the river—as the large number of sailboats in this painting indicates. Claude Monet, who lived in Argenteuil from 1871 to 1878, constructed a bateau-atelier, or “boat studio,” in order to achieve a more intimate vantage point from which to paint the river; his boat is visible in the lower-right corner of the painting. In this work, painted from a bridge, Monet conveyed atmospheric effects through loose brushwork and the suppression of details. 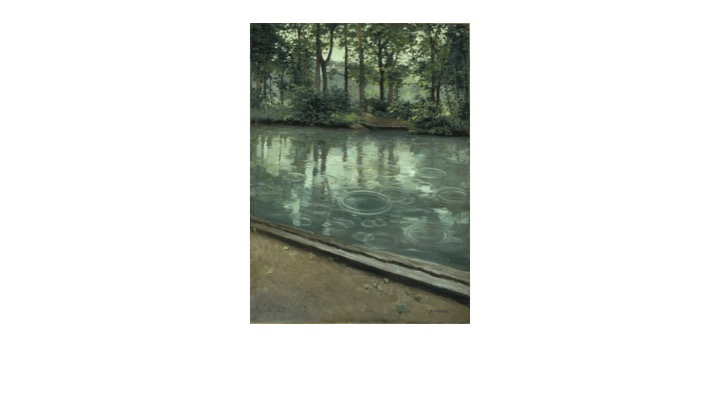 Gustave Caillebotte painted The Yerres, Effect of Rain on his family’s property outside Paris. The composition includes a glimpse of a boat—perhaps Caillebotte’s—just visible on the far shore of the Yerres River. The artist was an avid rower, and canoes, skiffs, and rowboats appear in many of his works. The painting’s vertical format, diagonal lines, and stylized pattern of raindrops also suggest the influence of Japanese woodblock prints, which had been available in France since the early nineteenth century, and were collected by many artists. Their distinctive aesthetic qualities had a strong influence on Impressionism. 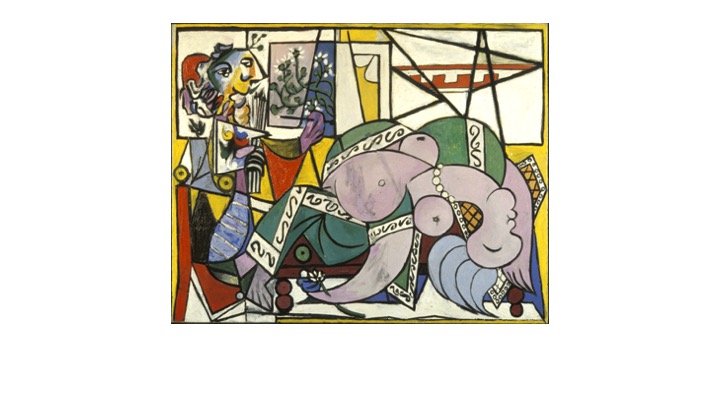 The Studio is one of Picasso’s major works addressing the theme of artist and model. A provocative intersection of style, subject, and biography, the work portrays Picasso himself, standing at his easel, and his much younger model and mistress Marie-Thérèse Walter reclining on a couch. The exuberant colors and bold shapes reflect Picasso’s continuing development of the radical Cubist vocabulary he and Braque pioneered before World War I. Yet the composition also reinforces traditionally misogynist perceptions about male creativity and female passivity. In this work, the artist’s realm is defined by angular geometries evoking rational intellectualism, while Marie-Thérèse’s form is one of rounded, organic shapes that suggest her creativity is linked to her sexuality. 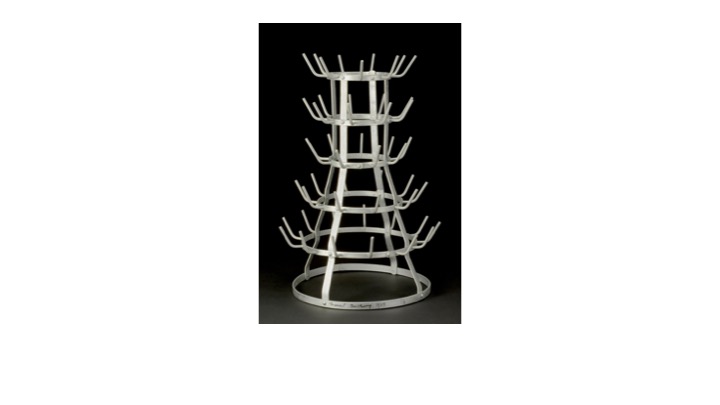 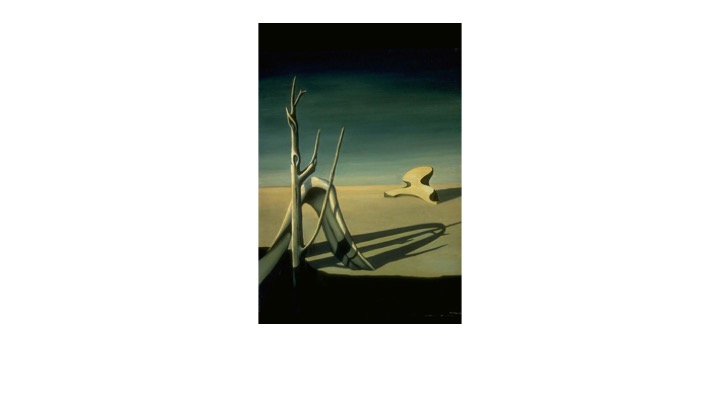 Lost Record illustrates the Surrealist interest in picturing the subconscious and human imagination. Sage’s mysterious vista exists in an alternate reality or dreamscape. Sage was one of the first women artists officially accepted as a member of the Surrealist movement after her move to Paris in 1937. She painted Lost Record the year she married fellow Surrealist painter Yves Tanguy. The composition’s biomorphic forms and indeterminate landscape reveal his stylistic influence. Sage selected Lost Record to be featured in her first solo exhibition, held in 1940. 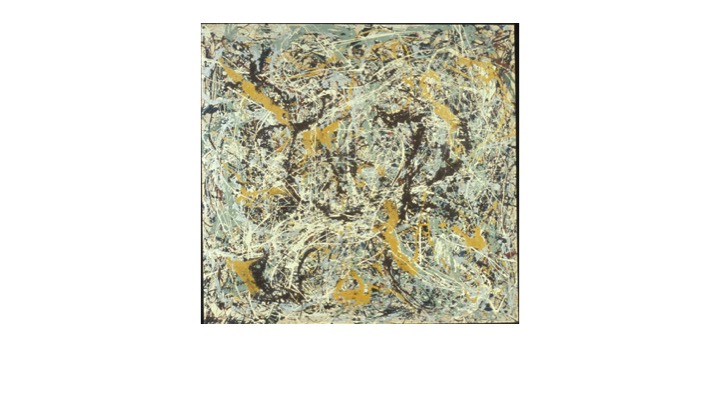 Around 1945, Jackson Pollock abandoned a Surrealist mode of painting (inspired by psychoanalysis he was undergoing) to experiment with radical abstraction. The drip paintings he produced in the late 1940s and early 1950s have become icons of modern art. He created these works by dripping and dribbling liquid enamel paint directly from cans onto a canvas laid on the floor, then manipulating the paint with sticks or stiff brushes. Through this technique, which highlights artistic process and materials, he produced a richly layered web of patterns and colors. In 1948, to further emphasize the works’ lack of traditional subject matter, Pollock began to title his paintings only with numbers and dates. 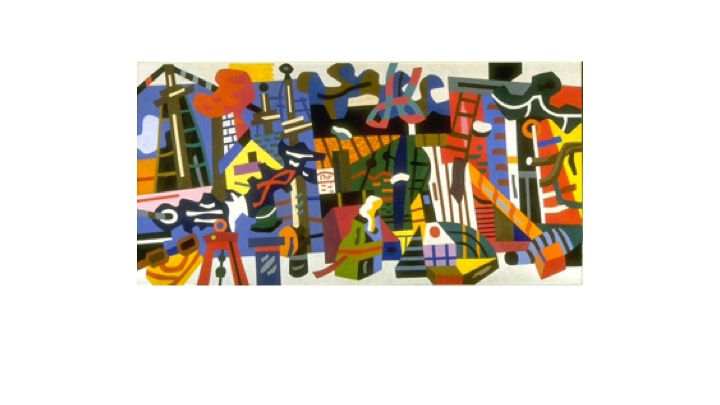 Stuart Davis’s mural Swing Landscape is widely regarded as one of the masterpieces of twentieth-century American art. With its bold colors and forms, this abstracted portrayal of the Gloucester, Massachusetts, waterfront takes visual cues from Cubism, but also expresses Davis’s artistic theories of color and space, and reflects the influence of jazz and swing music. Commissioned by the Works Progress Administration (WPA) for the Williamsburg Housing Project in Brooklyn, New York (constructed 1936–38), Davis intended his mural to introduce modernism to a less privileged audience. However, the mural was ultimately not installed at this site, and in early 1942, was instead allocated by the WPA to Indiana University. 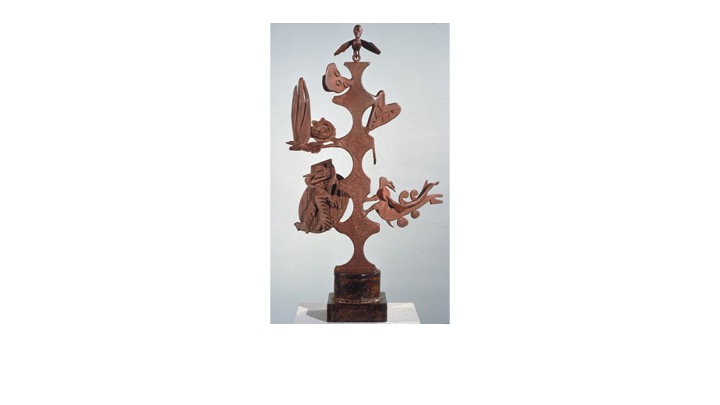 David Smith began making painted and welded steel sculptures in the 1930s, attempting to reconcile the disparate characteristics of painting and sculpture. Smith’s sculptures of the immediate postwar period are heavily influenced by Surrealism and embedded with autobiographical references. The images attached to Pillar of Sunday’s vertical trunk refer to Smith’s recollections of the Sunday rituals of his youth, such as a preparing a chicken for a festive dinner. 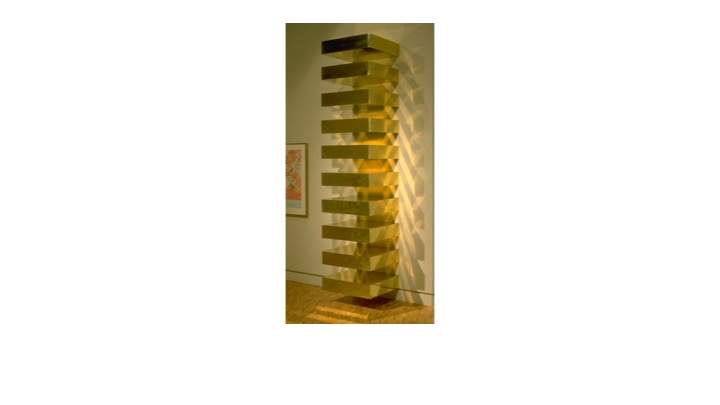 Purchased with the aid of funds from the National Endowment for the Arts and Gifts from Dr. and Mrs. Henry R. Hope and the Friends of Art, Eskenazi Museum of Art, Indiana University

Drawing upon his training in philosophy and art theory, Donald Judd developed a formal vocabulary based on serial geometry in the mid-1960s. He termed his three-dimensional constructions “specific objects,” indicating their refusal of the illusionism inherent in traditional painting and sculpture. Stacked boxes, which exist in various versions, were his signature artistic form. The reflective surfaces of the ten boxes displayed here emphasize the relationship of the geometric forms to the surrounding spatial environment. Although the boxes were industrially fabricated, Judd paid great attention to the selection of surface finish, color, and final installation. 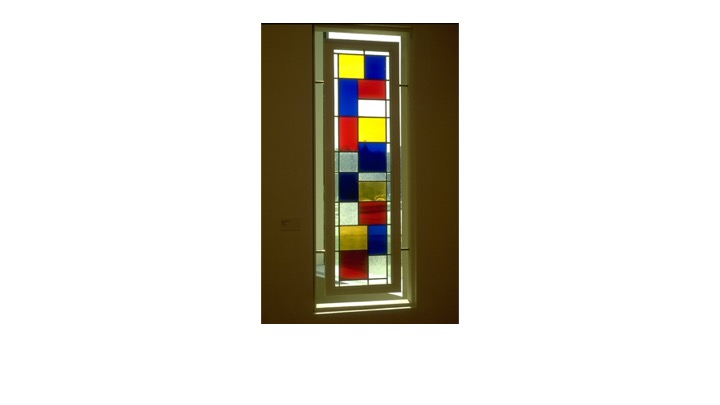 In 1915, while serving in World War I, Theo van Doesburg discovered the work of Piet Mondrian, whose paintings were comprised of primary colors, geometric forms, and straight lines. Van Doesburg became an adherent to Mondrian’s aesthetic theories, advancing them through his journal De Stijl, which he founded in 1917. Van Doesburg’s stained glass designs, such as this window designed for a girls‘ school in the Dutch town of Drachten, exemplifies the De Stijl aesthetic. Like the Russian Constructivists, De Stijl artists based their designs on mathematical principles, imbuing their work with an impersonal, but visually harmonious, sensibility. 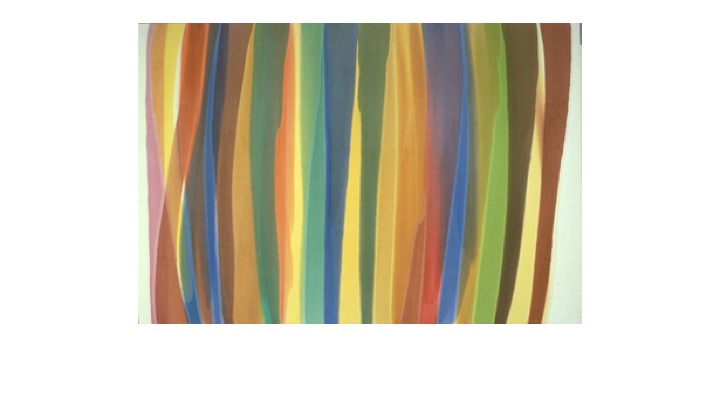 Morris Louis was a member of the Washington, D.C.-based group of artists known as the Washington Color School. These artists treated color itself as the subject of painting. Louis is known for his luminously colored, abstract, poured paintings, which he created using a technique he learned from Helen Frankenthaler: he poured thinned washes of acrylic paint onto unprimed cotton canvas, so the paint would soak deeply into the weave of the canvas, and blend slightly with the other colors. Louis tended to work in series. Beth Aleph is from his Veils series, characterized by semi-transparent bands of color that recall gauzy veils of sheer fabric