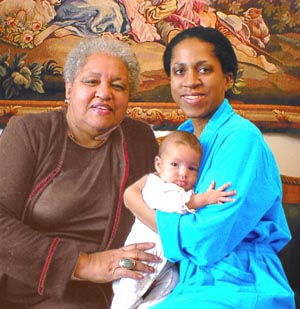 Journalist and writer Yelena Khanga (b. 1962) was born and grew up in Moscow. She is the daughter of Abdullah Kassim, first vice-president of Zanzibar and and historian and educator Lily Golden, daughter of Oliver Golden and Bertha Bialek.

After graduation from the Moscow State University with a degree in journalism, Khanga resided in Boston as a participant in a foreign exchange program at the Christian Science Monitor. During this period she developed in interest in her American roots, and later she received a grant from the Rockefeller Center in support of her genealogical research.

Khanga and the story of her family became well-known after the appearance of her Soul to soul: a Black Russian American family, 1865-1992 in 1992, and a number of publications in Washington Post, New York Times and others. In 2001 she published a book in Russian Про всё where she explores her roots.

Khanga has both Russian and American citizenships and divides her time between the United States and Russia.

Andrea Lee (born 1953) is an American author of novels and memoirs. Her stories are often international in setting and deal with questions of racial and national identity. Author of Russian Journal, 1981.