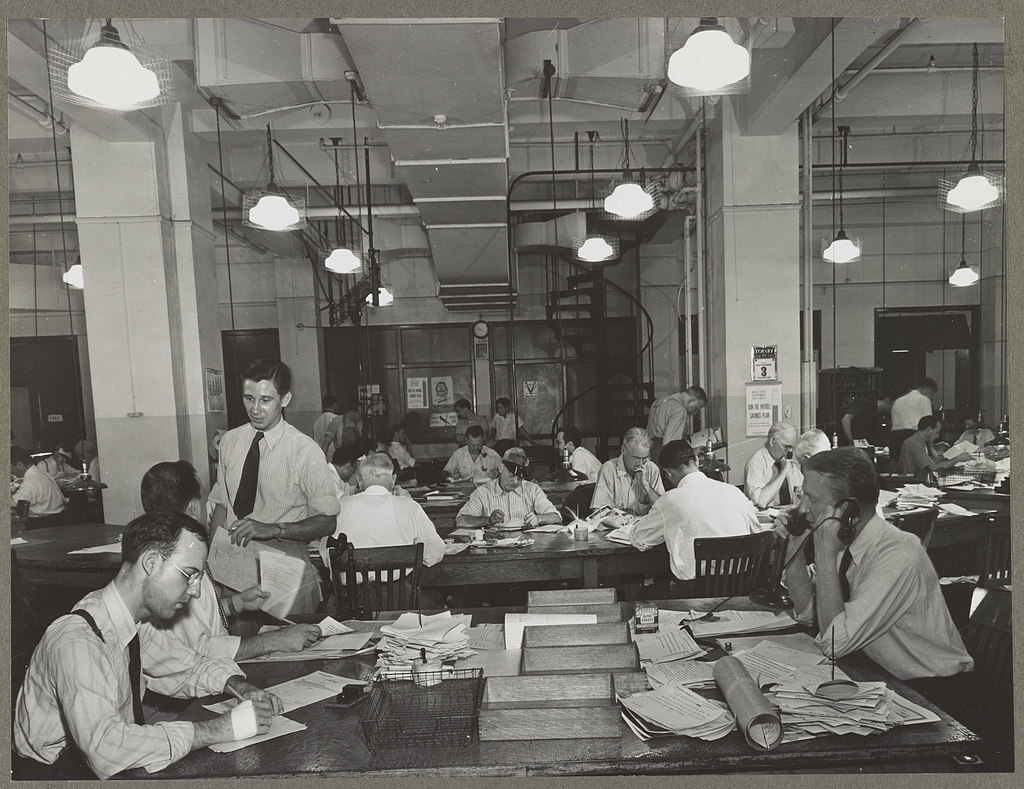 The creator of a work is its owner unless the creator has agreed otherwise.  One such circumstance is if the creator is engaged to make a "work-for hire."  This is when someone is employed by another to create works and the employer keeps the copyright.  For example, a magazine employing a photographer might insist on keeping the copyright and state in its contract with the photographer that the pictures she takes are works-for-hire.  The photograph at right shows the newsroom of The New York Times in 1941.  The staff shown would be employees and the stories they wrote would be works for hire.

The Copyright Act defines a work for hire as

(1) a work prepared by an employee within the scope of his or her employment; or

(2) a work specially ordered or commissioned for use as a contribution to a collective work, as a part of a motion picture or other audiovisual work, as a translation, as a supplementary work, as a compilation, as an instructional text, as a test, as answer material for a test, or as an atlas, if the parties expressly agree in a written instrument signed by them that the work shall be considered a work made for hire. For the purpose of the foregoing sentence, a “supplementary work” is a work prepared for publication as a secondary adjunct to a work by another author for the purpose of introducing, concluding, illustrating, explaining, revising, commenting upon, or assisting in the use of the other work, such as forewords, afterwords, pictorial illustrations, maps, charts, tables, editorial notes, musical arrangements, answer material for tests, bibliographies, appendixes, and indexes, and an “instructional text” is a literary, pictorial, or graphic work prepared for publication and with the purpose of use in systematic instructional activities.

A "collective work" is "a work, such as a periodical issue, anthology, or encyclopedia, in which a number of contributions, constituting separate and independent works in themselves, are assembled into a collective whole."

Section 201 of the Copyright Act says " In the case of a work made for hire, the employer or other person for whom the work was prepared is considered the author for purposes of this title, and, unless the parties have expressly agreed otherwise in a written instrument signed by them, owns all of the rights comprised in the copyright."

Even if the parties' contract says a work is a work for hire, it will not be a valid transfer of the copyright unless the work fits within the definitions above.  For example, a work created by an independent contractor is not a work created by an employee for purposes of the Copyright Act.  In Community for Creative Non-Violence v. Reid, 490 U.S. 730 (1989), the U.S. Supreme Court considered the ownership of the copyright in a sculpture created by Reid for the organization Community for Creative Non-Violence.  The case hinged on Reid being an independent contractor and therefore the work could not be a work for hire.

If a creator is not an employee, then a work can be a work for hire only if it is one of the types of works described in the second part of the definition.  So an American publisher may hire someone to translate a foreign work into English for publication in the United States and state in the translator's contract that the resulting translation is a work for hire.

But if the type of work is not listed in the second part of the definition, then it cannot be a work for hire unless the creator is an employee. For example, the record industry was able to obtain an amendment to the Satellite Home Viewer Improvement Act of 1999 that inserted into the Copyright Act's definition of works that could be works for hire the term "sound recordings." This benefited the record industry as it  kept musicians from claiming any ownership in the recordings they made.  One benefit to the record industry was that it eliminated for sound recordings the termination right that allows creators to terminate assignments of their copyrights as the termination right does not apply to works for hire.  The amendment would have kept musicians from regaining rights to their work.  After protests from musicians, Congress removed sound recordings from the definition the next year and made the change retroactive as if the revised definition had never taken effect.