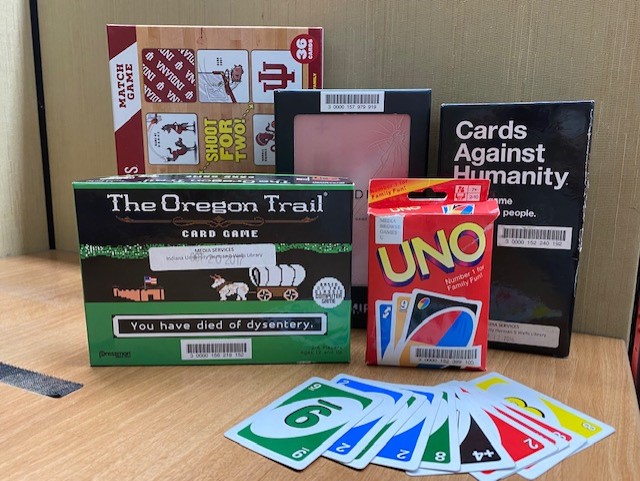 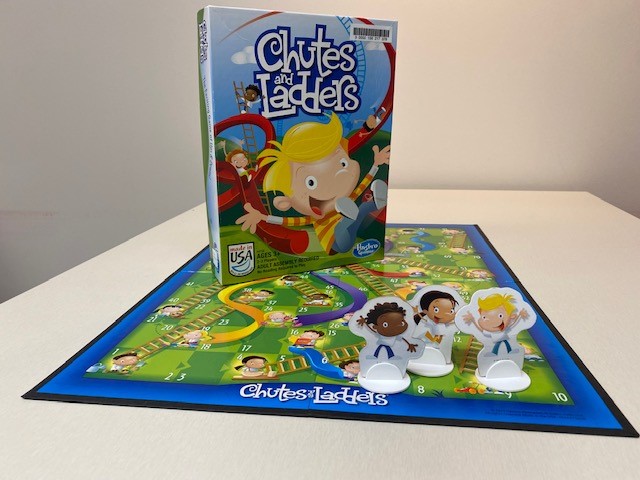 "Climb up and slide down in the exciting game of ups and downs, Chutes and Ladders! You and the character on your pawn can see the square marked 100, but its not so easy to get there. If you land on a good deed, you can shimmy up a ladder, but land on the wrong spot and youll shoot down a chute! Spin the spinner to see how many spots youll move. Will your new spot send you down or move you up, up, up? Slip, slide and see if you can win at Chutes and Ladders!" --Hasbro.com 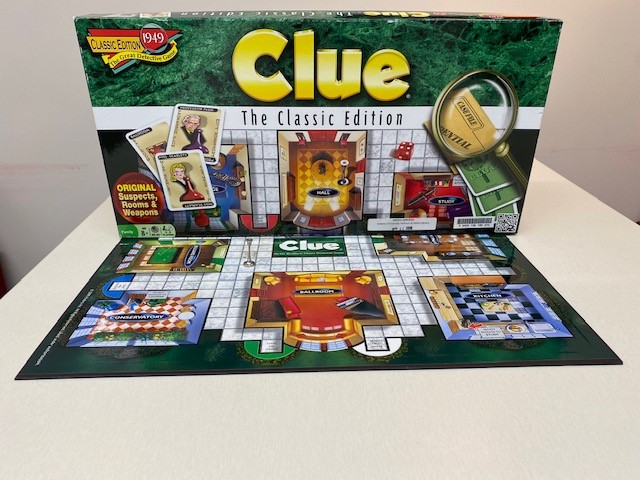 "For generations, Mr. Boddy has met his end at the hand of one of six legendary suspects in the classic detective game CLUE. Professor Plum, Mrs. White, Mr. Green, Mrs. Peacock, Miss Scarlett and Colonel Mustard are all here in Boddy Mansion. One of them has done away with Mr. Boddy but in which of the nine rooms (perhaps the Library, or Lounge, or Conservatory)? And which of the six weapons was used to commit this dastardly deed (the Wrench, the Rope, or maybe the trusty ol' Lead Pipe)? Collect the right clues, make the right deductions to determine Who? Where? Which weapon? and you'll solve themystery and win the game!"--Container. 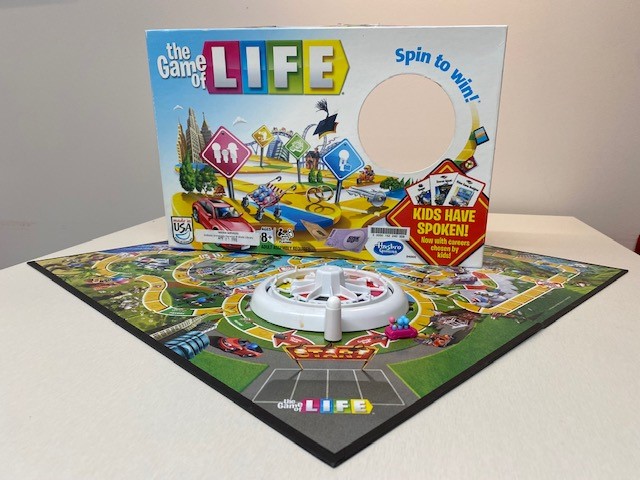 The Game of Life

Objective for players is to obtain employment in a career, collect money, and have the highest dollar amount at the end of the game. 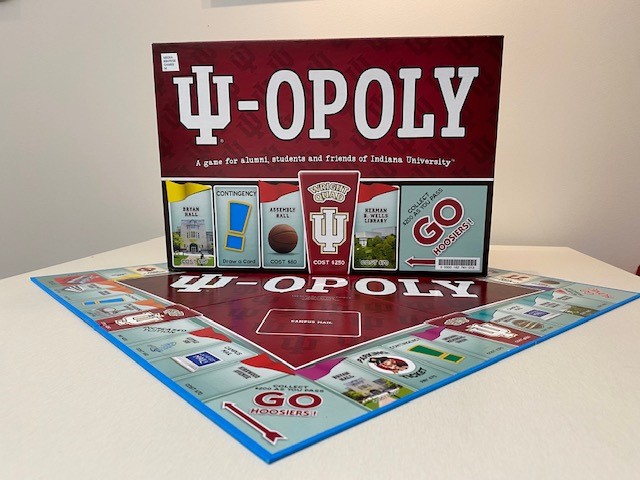 "A game for alumni, students and friends of Indiana University"--Container. 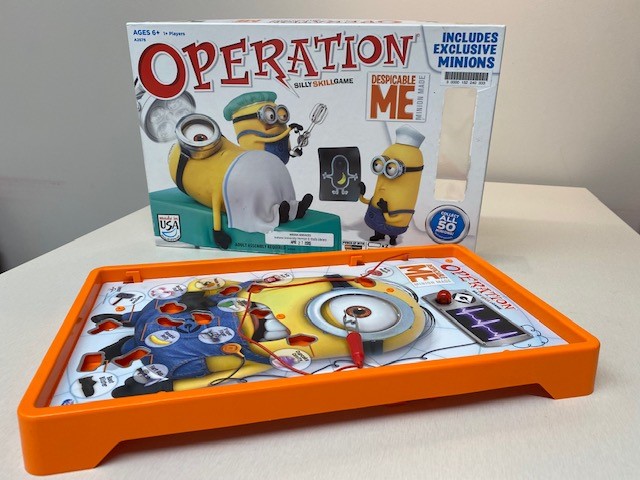 "Whaaa'?! Stuart's having a bad, bad day. He accidentally swallowed some unicorn fluff, his noggin's gone nutty, and his tongue is toxic! What's a Minion to do?! Operate!"--Container. 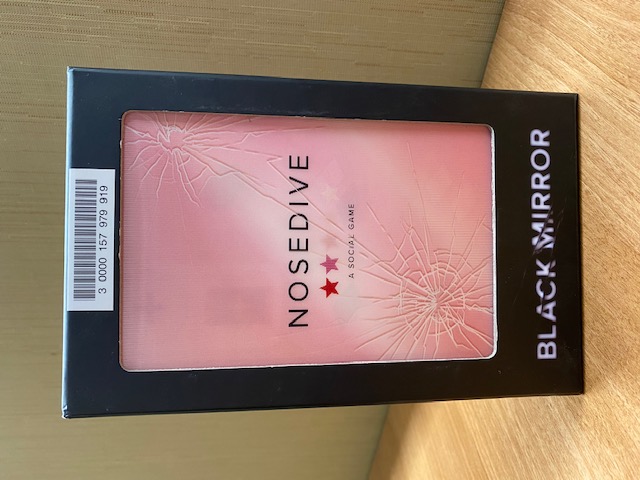 "Gather your most influential friends for a game based on the Black Mirror episode 'Nosedive.'  Create a 'perfect' life by collecting Lifestyle cards, while avoiding any dings to your Social Score that could cause everything you've worked for to come crashing down."--Container 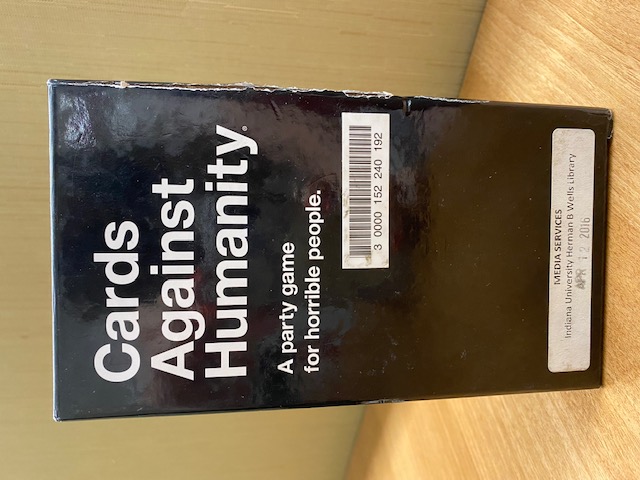 "A party game for horrible people.  Unlike most of the party games you've played before, Cards Against Humanity is as despicable and awkward as you and your friends.  The game is simple.  Each round, one player asks a question from a black card, and the other players answer with their funniest white card."--Container 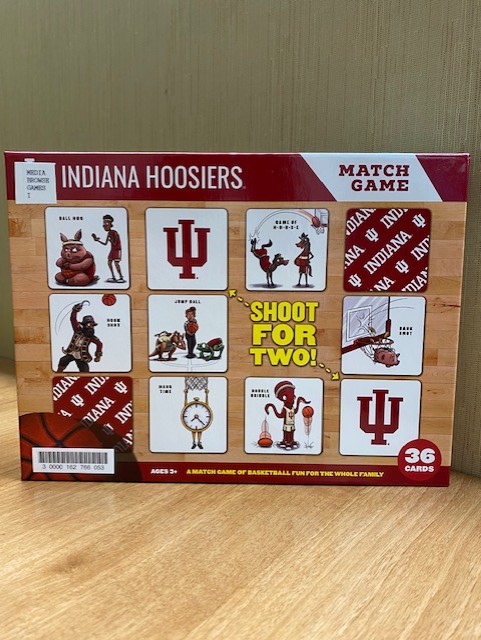 "Fun has met its match!  Test your memory with this classic game of mixing and matching.  Common sport phrases are given a funny twist with unique one-of-a-kind illustrations featuring your favorite team.  Fans of all ages can let their competitive side shine will having a laugh at the same time.  Perfect for family game night!"--Target 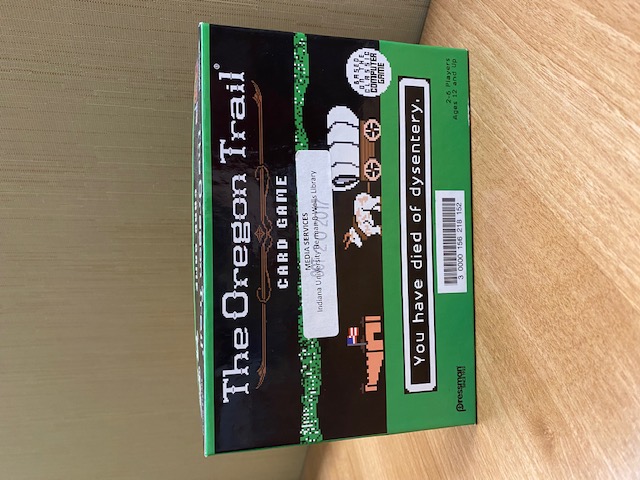 "All sorts of gruesome deaths await you and the rest of your wagon party in this official multi-player card game version of the classic computer game.  To win you'll need to keep one player alive all the way from Independence, MO to the Willamette Valley.  But between rattlesnakes, starvation, dead oxen, broken bones, dysentery, and a host of other calamities the odds are long . . . almost as long as the Oregon Trail itself."--Pressman 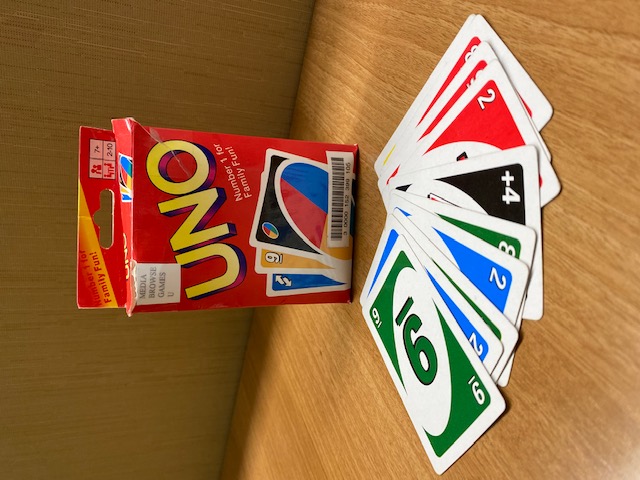 Uno is a classic card game ideal for any size party with simple rules that make it easy to learn.

To learn more about our jigsaw puzzles from BIPOC artists, pop on over to our special feature on "Representation & Identity in Games" feature. 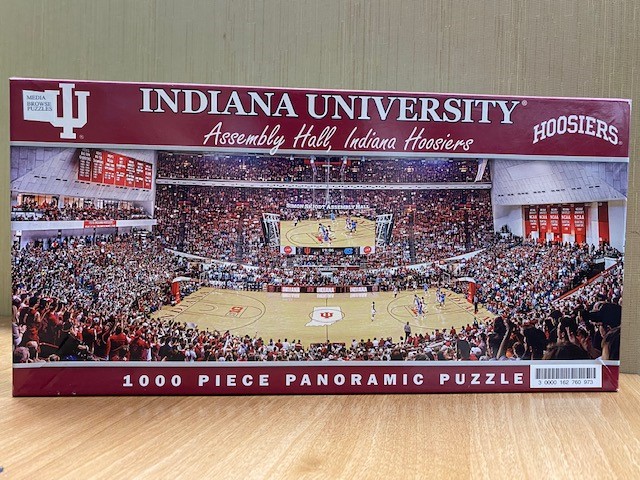 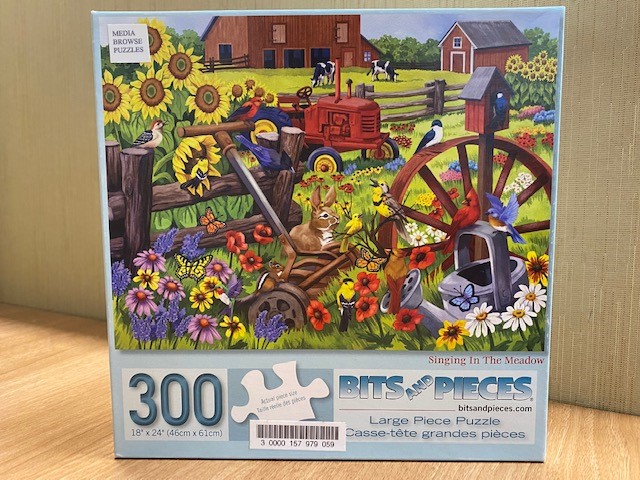 Singing in the meadow

"Singing In The Meadow is a 300 piece jigsaw puzzle designed by artist Nancy Wernersbach. Colorful birds, butterflies and flowers fill a meadow in this country farm scene. A roaming split rail fence keeps the cows safely inside the paddock while they graze."--Publisher's website. 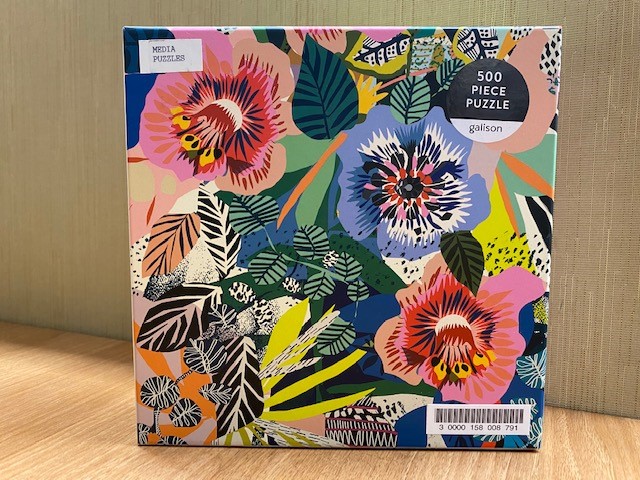 "The Lost In the Garden 500 Piece Puzzle features the colorful floral artwork of Nigerian-born, UK-based artist, Kitty McCall. Influenced by the natural world around her, along with the vibrant landscape of her early childhood in Nigeria, Kitty McCall has developed a signature style of bold colors, overlaid patterns, and shapes to create geometric designs and floral landscapes for interiors, and accessories."--Publisher's website. 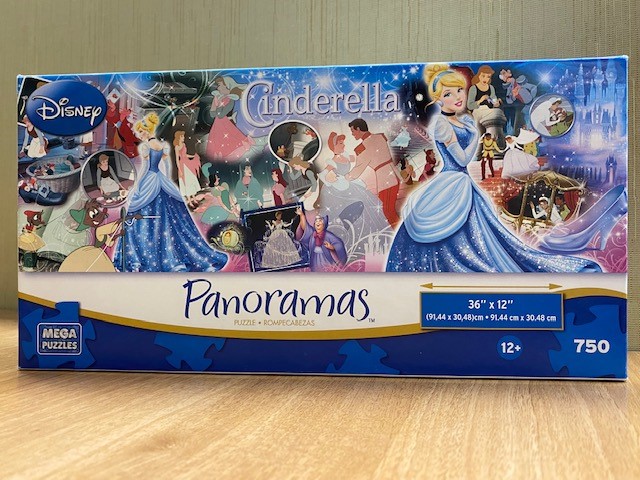 To learn more about our tabletop role-playing games from women and LGBTQ designers, pop on over to our special feature on "Representation & Identity in Games" feature. 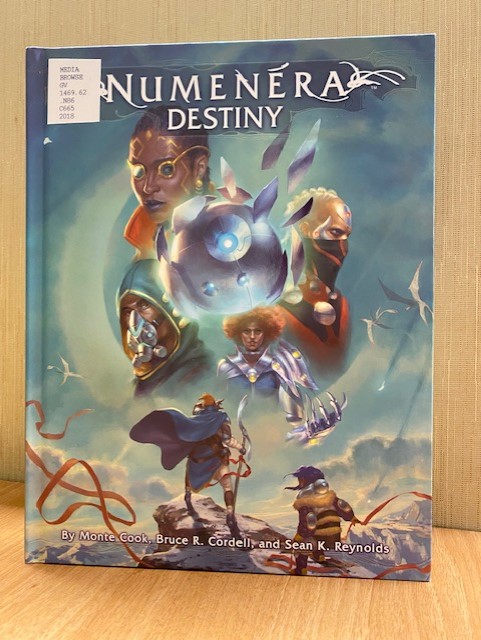 "For countless millennia, the great civilizations of the prior worlds ruled the earth. They built cities and machines of unimaginable grandeur and scale. They reshaped the very planet and cast off from it to the stars, the universes, and even realms outside our reality. Their works were beyond number and beyond wonder. But now they are gone... Numenéra Destiny opens a new exhilarating chapter of the Numénera roleplaying game, with everything you need to help lift the Ninth World into a brighter future." --Cover 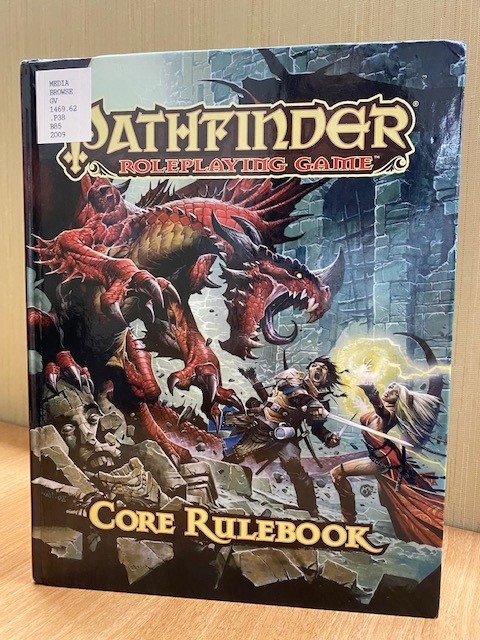 "The Pathfinder Roleplaying Game puts you in the role of a brave adventurer fighting to survive in a world beset by magic and evil. Will you cut your way through monster-filled ruins and cities rife with political intrigue to emerge as a famous hero laden with fabulous treasure, or will you fall victim to treacherous traps and fiendish monsters in a forgotten dungeon....This imaginative tabletop game builds upon more than 10 years of system development and an open playtest involving more than 50,000 gamers to create a cutting-edge RPG experience that brings the all-time best-selling set of fantasy rules into the millennium" --Cover 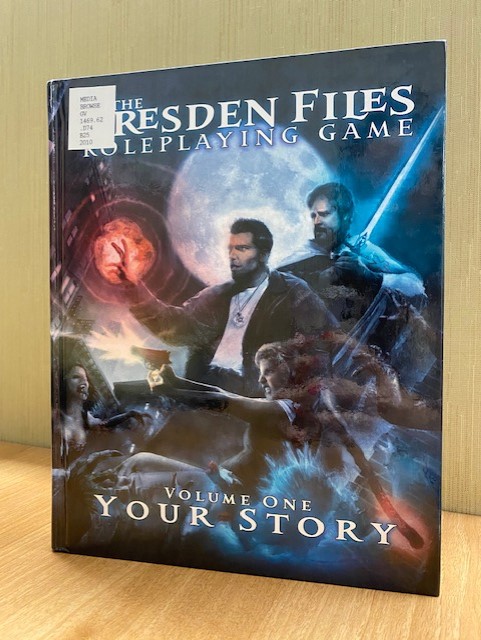 "What's your story? Whether you're a champion of God, changeling, vampire, werewolf, wizard, or plain 'vanilla' mortal human being, this volume of The Dresden Files RPG gives you all the rules you need to build characters and tell your own stories in the Dresdenverse. Inside, you'll uncover the secrets of spellcasting, the extents of mortal and supernatural power, and the hidden occult reality of the unfamiliar city you call home" --Cover. 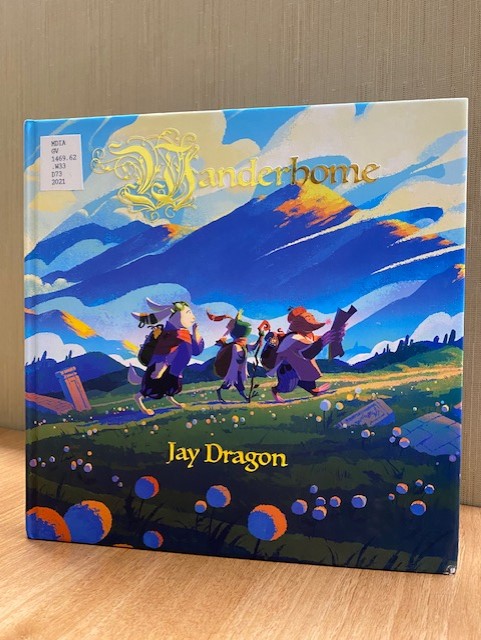 "Set forth into a world of grassy fields, mossy shrines, herds of bumblebees, rabbits in sundreses, geckos with suspenders, starry night skies, and the most beautiful sunsets you can imagine. We will befriend stag beetles the size of houses, argue with the King of the Floating Mountain, fall in love in the basket of a hot air balloon up in the clouds, and go on a journey with some of the most amazing people you could ask for. Where will we go? What will we see? We'll have to find out together. Will you join me?" --Cover