This guide will assist Dr. Rogers' students in locating sources for their research projects.

Audiovisual material at the ATM falls under four broad categories:

F – field collections. Collections and items that were gathered by researchers in the field of their work (usually in a specific geographic location, or with a particular cultural group).

B – broadcast collections. Recordings that were either recorded off of the radio or television by a researcher, or materials originally produced by a broadcast company for broadcast.

D – demo collections. Recordings made of multiple, various recordings used by faculty and scholars to demonstrate something, usually in a lecture or seminar, or that were used as early course reserves.

An example showing where the category is located in an archives call number:

This broad category (Field, Broadcast, Demo, Commercial) is reflected in each item's call number.  For example, the image below shows the catalog record for a 78rpm recording of Hoagy Carmichael's "Georgia on my Mind."

Under the "Holdings" information, the call number begins "86-231-C"

The "-C" indicates that this item is a commercially released recording 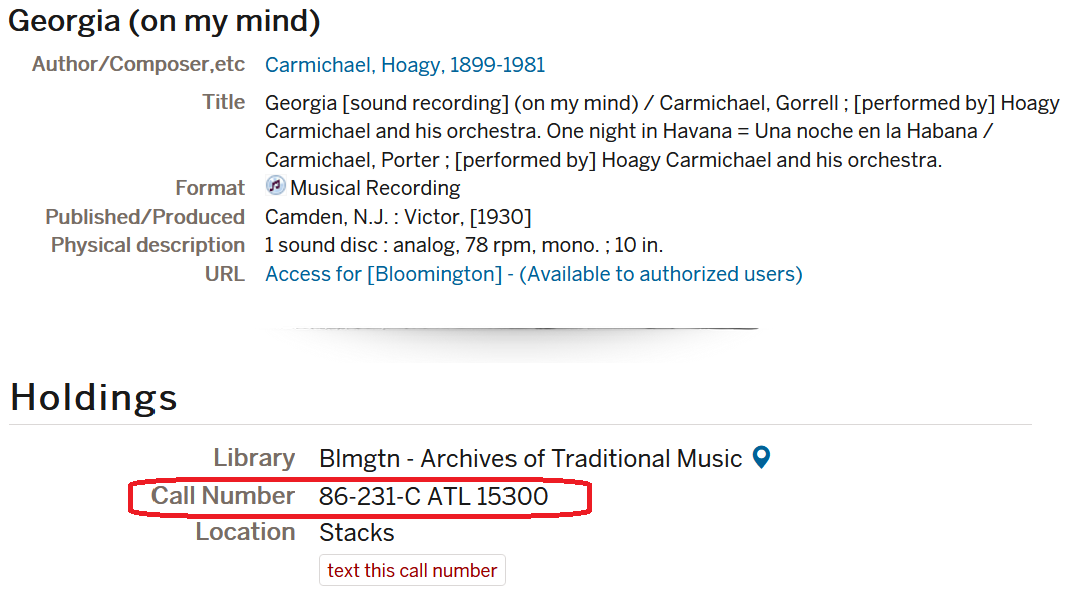 If you see a number after the letters "ATL" in an ATM Call Number, that means there is an access copy for the recording on-site in the ATM Library. So if you wanted to listen to the above item, you could come listen to it on an audiovisual playback machine in the ATM Listening Lab.

To capture ALL primary source items at the Archives of Traditional Music, you must use IUCAT’s advanced search option.

Then type the text string "-F" OR "-B" OR "-D" into the first search box, and select “Call number” from the drop down options.

To search for collections with particular subjects or topics, you can put those into the search as well in the second or additional search boxes. Word stemming happens automatically in IUCAT.  "Word stemming" means that the search “drum” will pull up any record that mentions drum, drums, drumming, etc.

Then in the left hand facet options, choose Archives of Traditional Music as the library...

NOTE: You can also limit your search using other facets such as format (e.g. audio recordings, manuscripts, visual materials (photographs), mixed materials) or language of materials by clicking the drop down sections on the left of the results list. 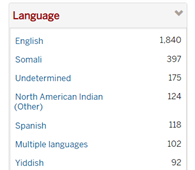