David Williams, I Freed Myself: African American Self-Emancipation in the Civil War Era

For a century and a half, Abraham Lincoln's signing of the Emancipation Proclamation has been the dominant narrative of African American freedom in the Civil War era. However, David Williams suggests that this portrayal marginalizes the role that African American slaves played in freeing themselves. At the Civil War's outset, Lincoln made clear his intent was to save the Union rather than free slaves - despite his personal distaste for slavery, he claimed no authority to interfere with the institution. By the second year of the war, though, when the Union army was in desperate need of black support, former slaves who escaped to Union lines struck a bargain: they would fight for the Union only if they were granted their freedom. Williams importantly demonstrates that freedom was not simply the absence of slavery but rather a dynamic process enacted by self-emancipated African American refugees, which compelled Lincoln to modify his war aims and place black freedom at the center of his wartime policies

Steven Hahn, A Nation Under Our Feet: Black Political Struggles in the Rural South from Slavery to the Great Migration

Emphasizing the importance of kinship, labor, and networks of communication, A Nation under Our Feet explores the political relations and sensibilities that developed under slavery and shows how they set the stage for grassroots mobilization. Hahn introduces us to local leaders, and shows how political communities were built, defended, and rebuilt. He also identifies the quest for self-governance as an essential goal of black politics across the rural South, from contests for local power during Reconstruction, to emigrationism, biracial electoral alliances, social separatism, and, eventually, migration. 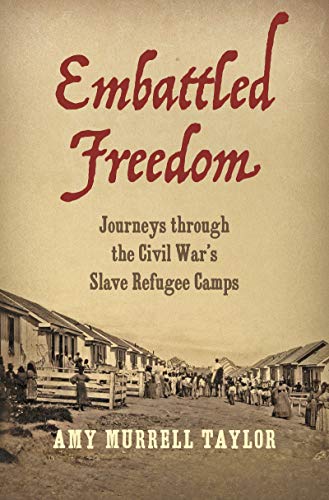 The Civil War was just days old when the first enslaved men, women, and children began fleeing their plantations to seek refuge inside the lines of the Union army as it moved deep into the heart of the Confederacy. In the years that followed, hundreds of thousands more followed in a mass exodus from slavery that would destroy the system once and for all. Drawing on an extraordinary survey of slave refugee camps throughout the country, Embattled Freedom reveals as never before the everyday experiences of these refugees from slavery as they made their way through the vast landscape of army-supervised camps that emerged during the war. Amy Murrell Taylor vividly reconstructs the human world of wartime emancipation, taking readers inside military-issued tents and makeshift towns, through commissary warehouses and active combat, and into the realities of individuals and families struggling to survive physically as well as spiritually. Narrating their journeys in and out of the confines of the camps, Taylor shows in often gripping detail how the most basic necessities of life were elemental to a former slave's quest for freedom and full citizenship.

Ira Berlin, The Long Emancipation: The Demise of Slavery in the United States

Perhaps no event in American history arouses more impassioned debate than the abolition of slavery. Answers to basic questions about who ended slavery, how, and why remain fiercely contested more than a century and a half after the passage of the Thirteenth Amendment. In The Long Emancipation, Ira Berlin draws upon decades of study to offer a framework for understanding slavery's demise in the United States. Freedom was not achieved in a moment, and emancipation was not an occasion but a near-century-long process - a shifting but persistent struggle that involved thousands of men and women. Berlin teases out the distinct characteristics of emancipation, weaving them into a larger narrative of the meaning of American freedom. The most important factor was the will to survive and the enduring resistance of enslaved black people themselves.

Recent scholarship on slavery has explored the lives of enslaved people beyond the watchful eye of their masters. Building on this work and the study of space, social relations, gender, and power in the Old South, Stephanie Camp examines the everyday containment and movement of enslaved men and, especially, enslaved women. In her investigation of the movement of bodies, objects, and information, Camp extends our recognition of slave resistance into new arenas and reveals an important and hidden culture of opposition.

Frederick Douglass, an escaped slave, became the greatest orator of his day and one of the leading abolitionists and writers of the era. He was fortunate to have been taught to read by his slave owner mistress, and he would go on to write three versions of his autobiography over the course of his lifetime and publish his own newspaper. By the Civil War and during Reconstruction, Douglass became the most famed and widely traveled orator in the nation; he was a fierce critic of the United States as well as a radical patriot. Blight has drawn on new information, as well as recently discovered issues of Douglass's newspapers, to the fascinating story of Douglass's life. 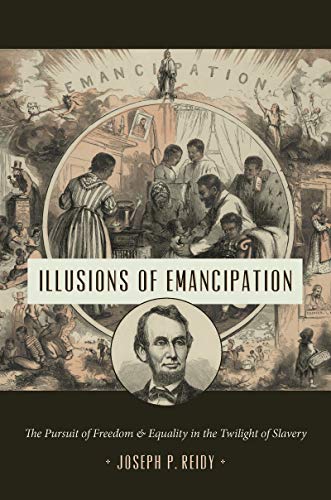 Joseph P. Reidy, Illusions of Emancipation: The Pursuit of Freedom and Equality in the Twilight of Slavery

In this sweeping reappraisal of slavery's end during the Civil War era, Joseph P. Reidy employs the lenses of time, space, and individuals' sense of personal and social belonging to understand how participants and witnesses coped with drastic change, its erratic pace, and its unforeseeable consequences. Emancipation disrupted everyday habits, causing sensations of disorientation that sometimes intensified the experience of reality and sometimes muddled it. While these illusions of emancipation often mixed disappointment with hope, through periods of even intense frustration they sustained the promise that the struggle for freedom would result in victory. 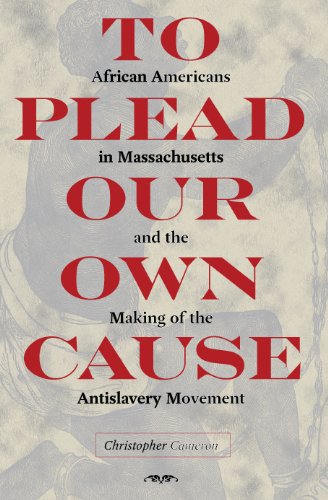 Christopher Cameron, To Plead Our Own Cause: African Americans in Massachusetts and the Making of the Antislavery Movement

The antislavery movement entered an important new phase when William Lloyd Garrison began publishing the Liberator in 1831—a phase marked by massive petition campaigns, the extraordinary mobilization of female activists, and the creation of organizations such as the American Anti-Slavery Society. While the period from 1831 to 1865 is known as the heyday of radical abolitionism, the work of Garrison’s predecessors in Massachusetts was critical in laying the foundation for antebellum abolitionism. To Plead Our Own Cause explores the significant contributions of African Americans in the Bay State to both local and nationwide antislavery activity before 1831 and demonstrates that their efforts represent nothing less than the beginning of organized abolitionist activity in America. Fleshing out the important links between Reformed theology, the institution of slavery, and the rise of the antislavery movement, author Christopher Cameron argues that African Americans in Massachusetts initiated organized abolitionism in America and that their antislavery ideology had its origins in Puritan thought and the particular system of slavery that this religious ideology shaped in Massachusetts. 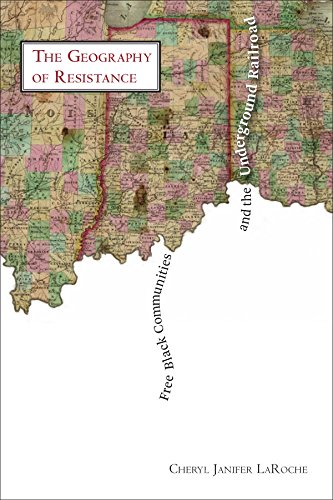 This enlightening study employs the tools of archaeology to uncover a new historical perspective on the Underground Railroad. Unlike previous histories of the Underground Railroad, which have focused on frightened fugitive slaves and their benevolent abolitionist accomplices, Cheryl LaRoche focuses instead on free African American communities, the crucial help they provided to individuals fleeing slavery, and the terrain where those flights to freedom occurred.

The Dred Scott case is the most notorious example of slaves suing for freedom. Most examinations of the case focus on its notorious verdict, and the repercussions that the decision set off-especially the worsening of the sectional crisis that would eventually lead to the Civil War-were extreme. In conventional assessment, a slave losing a lawsuit against his master seems unremarkable. But in fact, that case was just one of many freedom suits brought by slaves in the antebellum period; an example of slaves working within the confines of the U.S. legal system (and defying their masters in the process) in an attempt to win the ultimate prize: their freedom.

The popular history of the end of slavery has often told a false narrative of white Americans as the saviors of enslaved Black people. It has focused on battles of the Civil War and the white generals in charge of the armies, Abraham Lincoln and (a misreading of) the Emancipation Proclamation, and northern abolitionists (including some Black Americans, of course, like Harriet Tubman and Frederick Douglass). This popular story diminishes the central thread of white supremacy that weaves its way throughout American history. Historians have undermined this popular narrative in countless ways, demonstrating the hard struggle of many Black Americans to survive slavery or be massacred by it, to free themselves from slavery, and to undermine slavery.